Edit: I just caught hubby checking out plane prices from to …
Posted by Lady Igor at Wednesday, September 12, 2012 3 comments:

I talked to my grandfather on the phone Sunday. He was getting a cold and his voice sounded awful. Then I talked to my mother and she complained about the number of sick people she had in her workplace. Yep, the first waves of “Miserable mixed sickness” of the year are making its rounds.
I mentally congratulated hubby and I for having avoided getting sick. Of course it seems the goddess of Irony heard that because hubby and I woke up the next day feeling mildly crappy. I felt I had something stuck in the back of my throat and felt slightly warm.
I thought/hoped I could sleep it off yesterday if I stayed warm but I’m not feeling any better today.
In fact I had one of those bizarre dreams I usually get from being sick. I dreamt I was at this strange exotic market with Chemist and Biologist friend when Biochemist friend showed up and tearfully told us about how she had been driving a train and run over a pig. The train’s wheels had severed the pig’s ears and the pig had died from that (Eh?) And all the time in the dream I had short, brown hair. Like Rapunzel in the end of Tangled. I’ve had weird dreams about hair before but every time I have dreamt about doing something weird or drastic to my hair, it had somehow been the focus of the dream and been commented on. In this dream it was just there and no one commented on it, not even me.
I’ve had a lot of weird colours in my hair and been through a lot of awkward and unflattering growing out-styles but I think this style would be super unflattering on me!

Well, I’m going to stay warm, drink a lot of tea and go to bed early so I did a Nodosaurus with Schwarzkopf Gliss ultimate repair (The one with keratin) so I can keep my mane more like Rapunzel in the beginning of the movie… 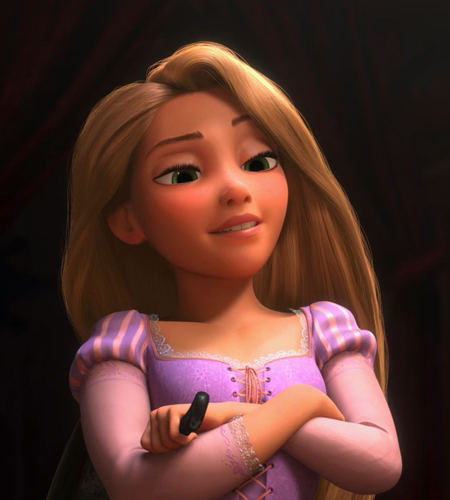 I prefer my hair long thank you very much!
Posted by Lady Igor at Tuesday, September 11, 2012 1 comment:

One of the things that thoroughly mystify me is the more or less random “hair growth boosting” recommendations that keeps circulating in the long hair circuit. Some of them seems to absolutely random. But I guess the weirdest thing is how absolutely sure and determined people are that their own special little booster is and how fantastic and amazing just their discovery is. It is as if they believe they discovered something truly magical or mystical. Things that people “Swear by!” are everything between particular scarves, tools, foods, techniques and supplements. Let us take something random I have seen recommended “For super speedy hair growth!!!, like water chestnut. It’s not a nut at all, but a part of the root that we eat. It’s a delicious slightly sweet, crunchy thing often found in Chinese cuisine. There is nothing special or magical about it though. Here is an in depth analysis of the nutrition value of water chestnuts: Nutrition data.
So what would make this crunchy, tasty little “nut” boost someone’s hair growth?
Is it that of water chestnut contains 16% of your daily recommended allowance of vitamin B6 and 16% of your daily recommended allowance of copper? Is it the fibre and sugars in combination? Maybe a magical ratio of omega 3 fatty acids to mega 6 fatty acids? Or does it contain something truly magical that science can’t even measure?

Well, maybe water chestnuts would be a magical hair growth booster if your diet was low on vitamin B6 and copper, sure. Or maybe it is the extra attention it brings to your diet.

But here is my theory: Of course traditional knowledge about placebo focuses solely on pills and the circumstances surrounding the pills, such as the enthusiasm of the person giving you the pills, the price and appearance of the pills etc.

This is a good and informational little video about it.

These covers a lot of the same but are still worth a watch.

I quite liked this article: Granted, its aimed at beauty products, but I think the authors points can be aimed at ”miracle growth cures” too. Placebo effect: believe your way to beauty results.

I spent most of the night on Google looking for factors, but mostly placebo is documented about pills. I guess no researcher ever saw this knowledge used when it comes to women wanting to grow their hair long fast? However, after way too many years in the longhair circuit I think traditional placebo definitions can be expanded:

The amount of trouble a “booster” causes will increase the effect. Sure massaging for 5 minutes every day will be good for your hair growth and probably cause people to see a growth spurt, but increasing it to 20 minutes and do it standing on your head and taking a special supplement with an expensive drink and incorporating a special food source in your diet will be extra good then, right? It’s basic psychology that humans want to see results equal to the amount of work you put in.
Positive environment and the amount of rave reviews will also “colour” peoples approach. If everyone else are seeing results and swearing by the new booster method, people will be more inclined to be positive towards it. This is also a common and well documented factor in placebo. If something really worked such a fantastic magic that you knew for sure, wouldn’t the whole world know by now and thinning, slow-growing hair been completely eliminated? Just for fun, let’s do a little math here. My personal growth rate has always been 1,5 or per month. Not impressive at all, but careful and conservative trimming has taken me from bald to knee length hair in 10½ years. People always assume I have a super high growth rate but I really don’t. I have simply managed to not shred my ends or have my hair butchered in 10+ years (Which is actually a big accomplishment I guess!)
Let’s say I really did get an inch a week, which isn’t actually a high number if you read some of the posts with high numbers people have reported. An inch a week would have gotten me to knee length-ish in just a year if I avoided trims.
Of course that didn’t happen. In fact, that never happened to anyone. Ever.
Instead it took me about ten years.

Growth spurts do exist, but they are only spurts and don’t last. A lot of them are probably just measuring errors combined with too much optimism from putting in too much effort in your hair growth. It’s completely human with wishful thinking, but don’t put any trust in people who claim growth rates that seems too good to be true.

But hey, in the time it took you to read this post, you hair grew like ! My post is a magical hair growth booster! Read this 10 times a day to experience truly magical growth! Of course placebo isn’t always a bad thing. A lot of the things people do in the name of hair aren’t bad at all. Who can object to fresh air and exercise? Or massages? Or paying extra attention to diet? Sleeping with a silk sleep cap?

No one would object to that, but the fact is still that the very best thing for good hair growth is the good old benign neglect and a well-rounded life where you don’t overdo anything to try to boost your hair growth. It’s the only thing that has ever proved effective to boost hair growth and hair quality over time. Don’t fool yourself with expensive, troublesome and time-consuming miracles. (Pictures shamelessly stolen from someone who put herself out there with her “magical method” and then decided we were all mean old jealous bitches on UTT for disagreeing with her hair-frying methods and posted them as proof to how fantastic and smart she was and how stupid we all are. They make me laugh my mean old jealous head off.) Email ThisBlogThis!Share to TwitterShare to FacebookShare to Pinterest
Labels: The Library

Leave in conditioner is a pain in my…

Usch. Seriously. I found out yesterday I was dangerously low on my trusty Sunsilk leave in conditioner. I go through a bottle in about two weeks so I use quite a lot of it.
It has before been a pain in my behind to actually find the stuff, but usually I find it at H&M, usually for 39,40 Swedish Kronor but sometimes for sale at 19,90.
In my book it’s the only leave in conditioner I’ve been able to find here that I want to pay for. I can get these hysterically expensive products plastered with praise and their pseudo-scientific promises on the packaging (But really truly is just only a bunch of cones) or I can find heat protecting sprays (Hah. If this stuff is so awesome at protecting from heat, why don’t we coat our fire-fighters in it and skip the big heavy suits?) but what I really want is a fairly simple cream based one.
So long story short: I went to the nearest H&M. I wanted to stay in and be lazy, but had to get off my ass and get dressed. Booh. I was in a bad mood before I even left the house.
Unfortunately they were out of “my” leave in and low on Sunsilk products in general. Sigh.
Then I went the long way to the H&M out at the Nova mall. They were out too! Argh!
When I asked for my product, the blank-eyed bimbo working there just twirled her bleached hair between her fingers and said “We never had such a product.” Usch.

Have I mentioned how deeply I despise women of her kind and how I blame them for the problems smart women face?
My mood was pretty shot even when a smarter employee there could inform me that their Sunsilk shipment had been late. Alright. I still had no other choice than just buying some other products in the meantime.
So I ended up buying 3 new products just to try them. Maybe I should make some actual product reviews for once?