Lyko.com had a 3 for 2 on these. Since I'm always on the lookout for leave in-conditioners, I got 3. 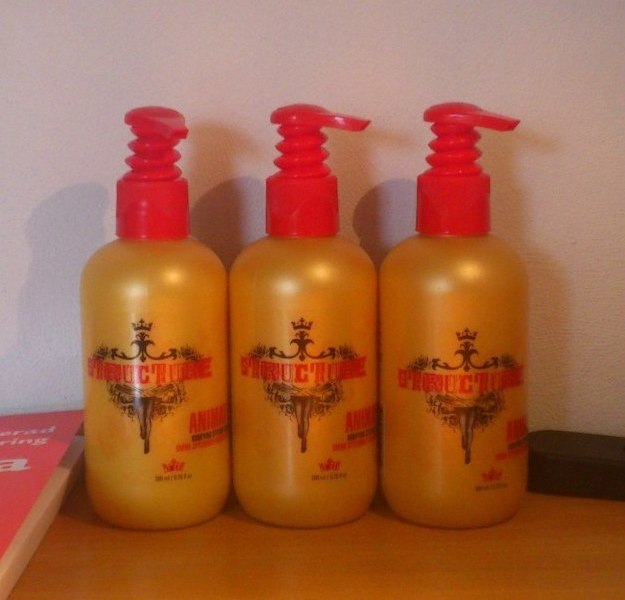 It has a really strong smell, like bubblegum. Seriously like that awful artificial bubblegum of the pinkest and cheapest bubblegum you could find.

It has a surprising amount of hold. Actually too much hold for my taste!
Some parts of my hair seemed to "freeze"in shape as it dried.

COSDNA says it has no ingredients marked red for safety, but it does have quite a few quite high i yellow. Hmm. Also a few that scores high on acne and irritant. 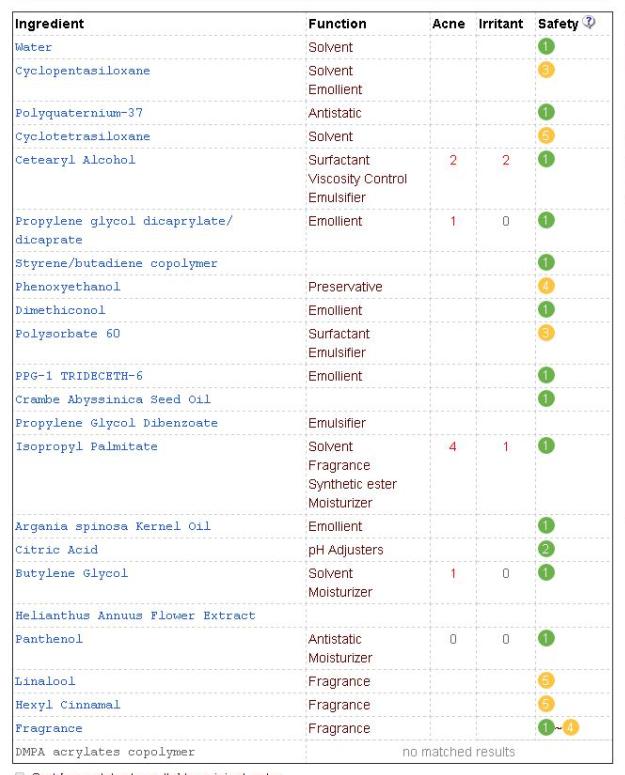 I haven't ever heard of Crambe Abyssinica, but Google informs me it "is a is an oilseed crop, native to the Mediterranean area. According to the Alternative Field Crops Manual, it is used as an industrial lubricant, a corrosion inhibitor, and as an ingredient in the manufacture of synthetic rubber. It can also be used in surfactants and slip and coating agents"

Other than that it contains argan (Seems like all products does these days, doesn't it?) and sunflower oil.

I'm not really sure what to think of this product. It's the first time I've encountered leave in-conditioner that offered me too much hold! And the scent is just really odd...
Posted by Lady Igor at Friday, May 20, 2016 No comments:

These were from Lyko.com and I found myself curious about the difference between them.
According to my experience so far, a "protector" are for "heat protecting" (*cogh* bullshit *cough*) and is usually cones, cones and another bunch of cones to hide heat damage and make hair appear glossy and healthy. 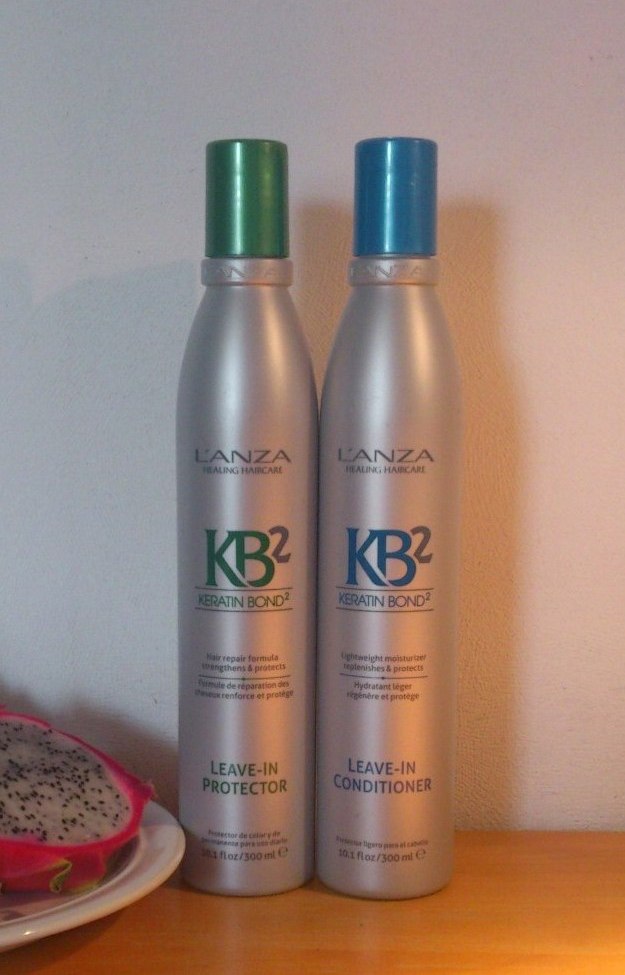 The leave in conditioner has a nice, firm consistency. Firm and creamy, just the way I like it.
Scent? Seriously, barely any.
Then I tried the protector and it was the exact same: Good consistency, the right amount of hold, added a bit of shine but nothing noticeable and a barely-there scent.
Both were exactly what I want in a leave in conditioner. Maybe, if I'm picky, both adds just a bit too much slip which makes handling difficult.
The only difference between them was that the protector had a vaguely yellow tone and the conditioner was white. 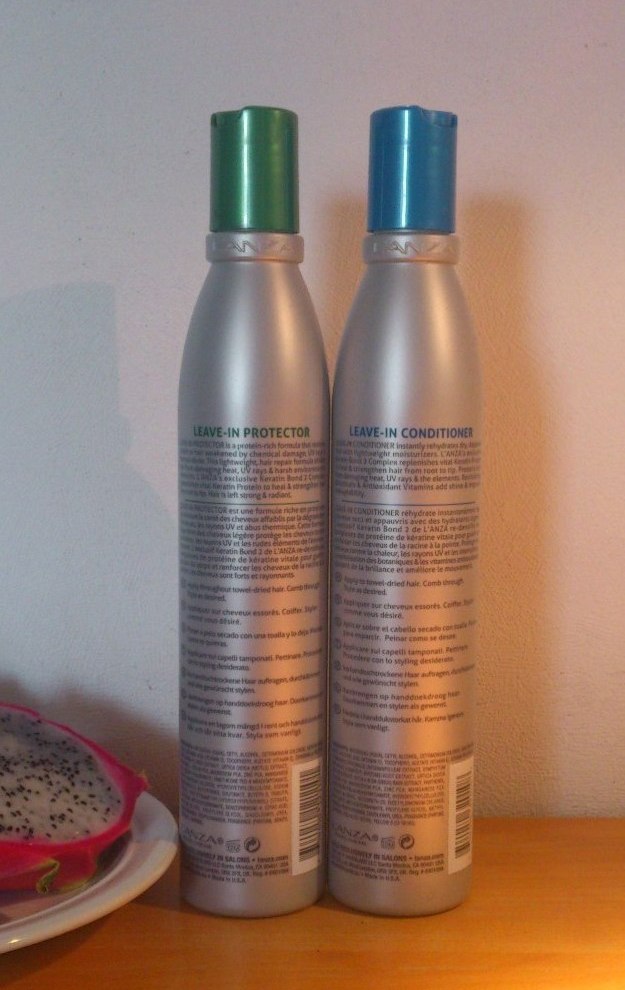 That didn't really make me any smarter about the ingredients and differences between them... 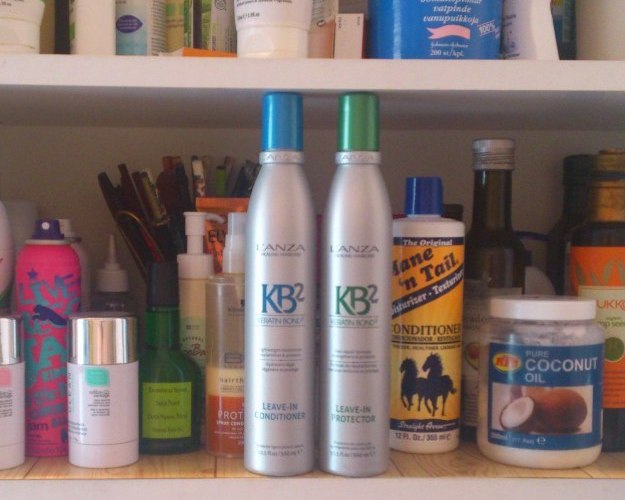 My only complaint about these?
The fact that I have to push them in to fit in my haircare stash shelf.

Verdict: I like them both and cannot tell the difference.
I will buy these again.
Posted by Lady Igor at Wednesday, May 18, 2016 No comments:

This week in hair

There really isn't so much "in hair" about my "week in hair", is there?
It feels a bit boring to write about, because it makes me realise how little time I actually spend messing with my hair!

Monday
Skin is increasingly unhappy. Looks like I have a bunch of closed comedones (Tiny whiteheads that don't come to a head and can't be squeezed like normal whiteheads) now? Stupid skin.
I switch to a honey and hemp oil routine, that usually calms my skin but also has a tendency to cause real whiteheads. Anxiously awaiting my Testerkorea haul!

My hair is in a Chinese bun.
My in laws come down from Stockholm for a visit and we have dinner together. We go to a a buffet style restaurant here that I have a hate/love relationship with. I love it because it has sushi, Thai and Chinese food at a good quality for a decent price. But I also hate it because it's exactly so good that we often end up going there instead of trying something new.

Tuesday
My hair is in a braided Nautilus bun with plenty of sun SPF. It's a really hot and sunny day!

I have taken a few days off to spend time with Hubby and the inlaws. Today we go to the Botanical garden in Lund. It's been in the present location since it was set up 1862–1867 after having been moved from the original location where it first was planted in 1690. 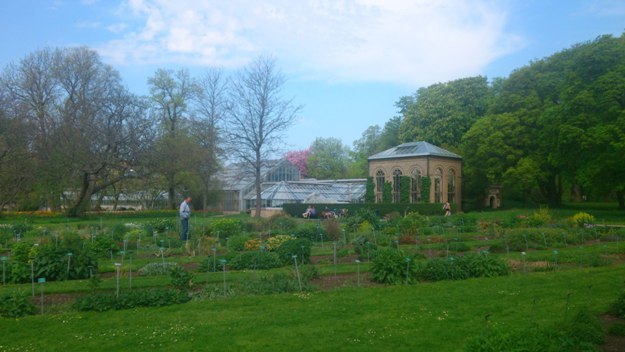 They have a guided tour for pensioners that we have signed them up for. 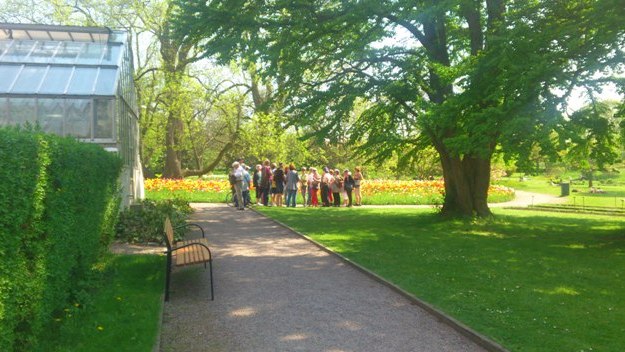 We're actually a bit jealous that we're not even allowed to join and hear about the history of the place, the plants and the animals... 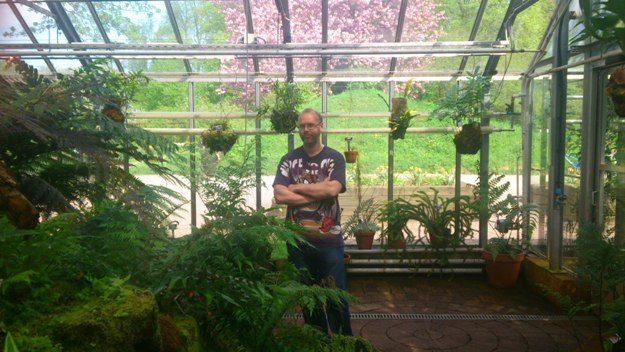 My beloved Mr. Igor and I taking our own tour of the green houses. 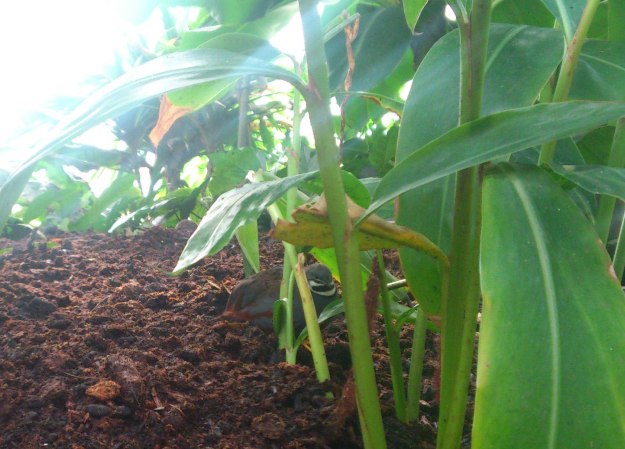 The quails are so cute!
They're king quails, which is actually the smallest quail.
I really like this picture... If you didn't know the scale, it would look exactly like a chubby dinosaur stomping around in a Cretaceous jungle. 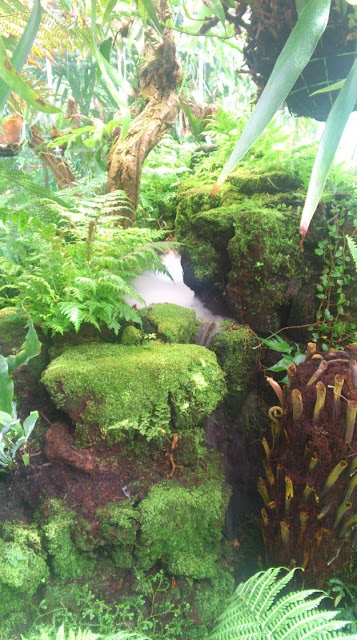 This little fountain made a really cool fog effect. I guess the humidity is too high for the vapor to absorb in the air, so it flows down like a waterfall? 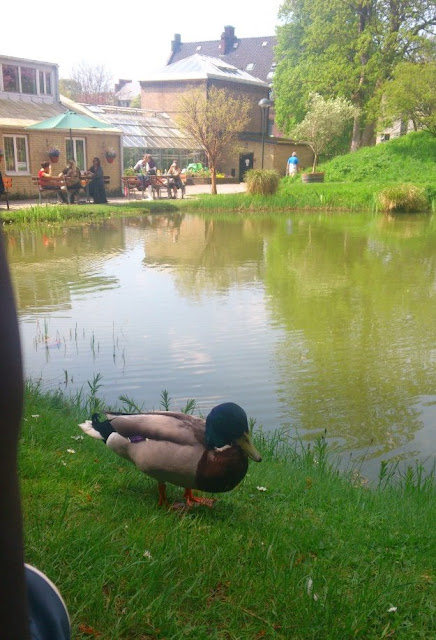 Afterwards, we had coffee and cake outside at the awesome little cafe at the pond. They make the best cakes!
We made friends with this cute little beggar :)

Wednesday
Another hot and sunny day! My hair is in my nameless braided stick bun. My hair is a bit unhappy. I think maybe the SPF spray makes it a bit hard to comb?
I get a compliment from a stranger in town! It always makes me shy and stuttering, lol.

We play tourists around Lund.
I took some pictures from inside Lund cathedral to share :)
The build was finished 1145. 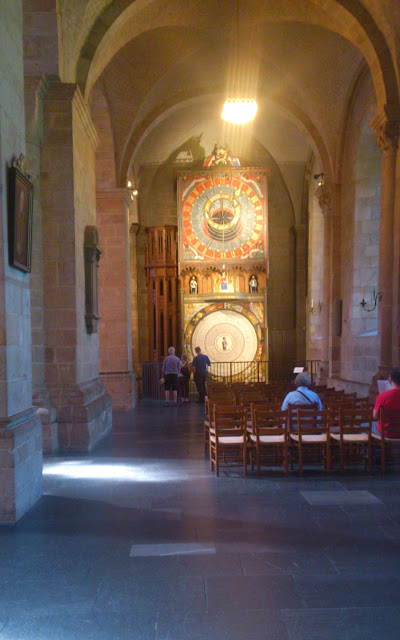 The astronomical clock is from 1425. 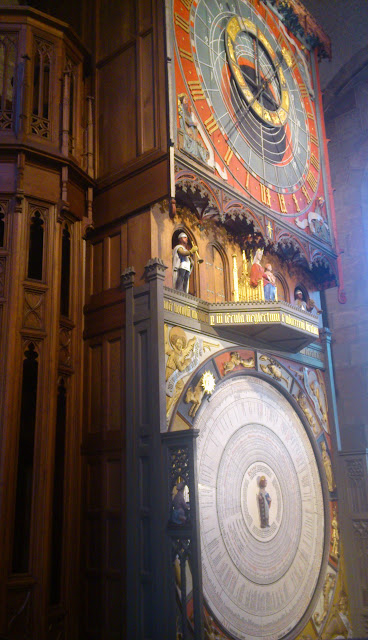 The clock shows the moon phases and has six figures that moves around while it plays a melodi. 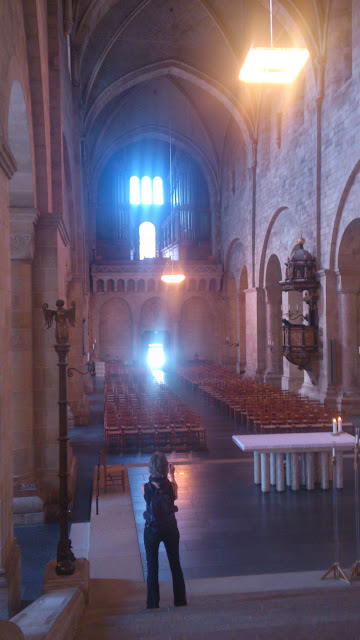 I tried avoiding the other tourists, but got some in the pictures anyways. 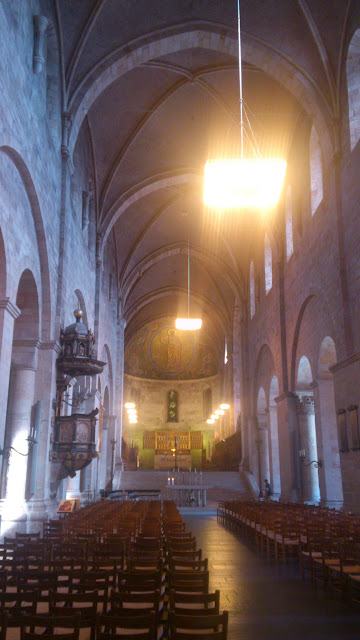 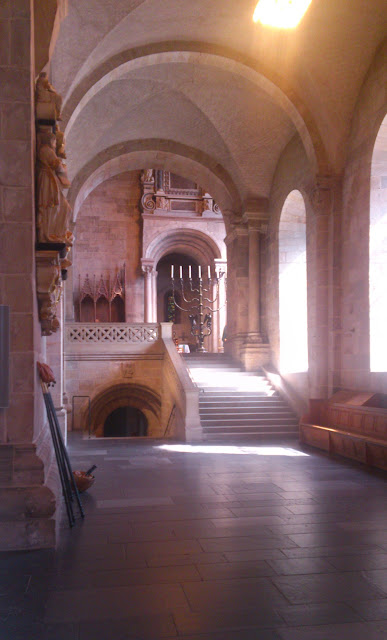 Entrance to the crypt. 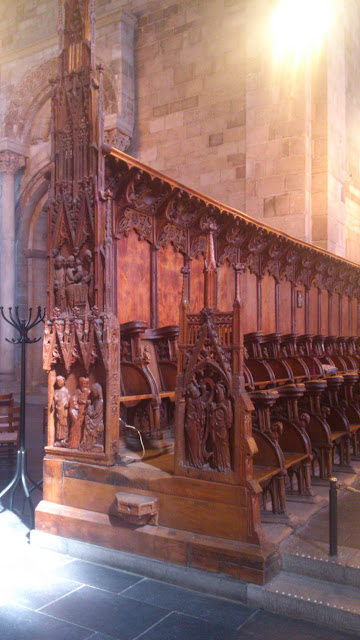 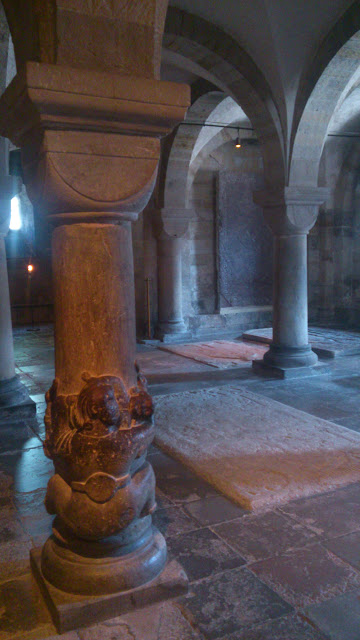 In the crypt, one of the pillars have a figure clinging to it. It's the giant Finn, who legend says was the main builder on the church. He was tricked by the saint Laurentius and turned into stone.
I think it's funny how many churches have this sort of pre-christian type legends tied to them.

I have a meeting today that I can't get out of, so I have to leave Hubby with the in-laws and go to Denmark for most of the day.

It's really hot! Despite the SPF I keep rubbing on, the skin my arms is unhappy because of all the sun it has been exposed to. Sigh.

Friday
Hubby and in-laws leave for Stockholm.
We both had the yellow Swedish ID card but they ran out last month. I didn't notice because I've been using my Danish drivers license for the ID-controls. I had been using my Swedish ID card since the pictures is 17 years younger (!) and actually looks like me now, but suddenly it wasn't good enough (You would think this kind of very important information might be in the media or something, but nope) so I had to use the drivers license instead and therefore didn't notice the expiration date.
(Hm, now I miss travelling. I especially always had a soft spot for Germany. I really need to be less busy so we can travel together...)
Since Hubby doesn't have a drivers license and we also found his passport had run out, it suddenly left him with no valid ID at all. When he tried to book a time to get a new passport instead (Valid for longer and works just the same) every possibility in Lund and Malmö was booked until september! The only way he could get any sort of ID this month, was if he traveled to Stockholm to get it.
But wait, it gets even stupider... Because his ID has run out, he needs someone to confirm that he is indeed him in person. Despite that I've been registered to live at the same address as Hubby for the past 6 years or so, I can't do that because I'm not Swedish. But who can confirm that? His parents who see him maybe once a year. Or his boss, whom he has never even met. Me, who live with him? Nope.

My hair is in the same braid as yesterday. I need a wash.

My testerkorea haul arrived.
I've been itching to do something different with my skin. In a decision that might come back and haunt me later, I start a Hadalabo-based routine up because I've been wanting to try the Gokujyun- line.

I rinse my hair and make a braid with my favourite conditioner, the Welcos Confume Argan Treatment Hair Pack before putting a bag over and wrapping a bandage around it.

I rinse my hair out in the morning and wash my scalp with V05, my favourite cleansing conditioner. Ah :)
Hair feels awesome!