Darkhorse suggested I try my own version of Caroline von Holnstein´s hairstyle. I liked the idea!

What I liked about the last try I did of this
I felt that the back bun in my attempt had a good placement. Even though this was way, way too low down if you look at the original painting. It had a sort of long and elegant neckline-look to it.
In fact, I liked it so much that I might start placing my buns higher for normal wear!

What I disliked about the last try I did of this
The center part. It flat out hurt my scalp.
(I have such an odd natural parting: My follicles twist just a few degrees above my left eyebrow, but there is a lot of resistance and strength in the direction)

The weird sort of "ram horn" sort of shape of the front braids. I just don´t have anything to nice to say about that. It just looks plain weird in real life.

Nightgerbil shared pictures of the show Victoria, where she wears a sort of "reverse" version of the front braids. Wrapping the front braids down and around is way more wearable. Here is a good picture where it shows the partings were way further back than for Caroline´s.
On a side note, the style probably evolved into this, since Caroline's (Age 19) updo is from 1834 and Victoria's recreation (Age 18 in the beginning of the show) is from 1837. 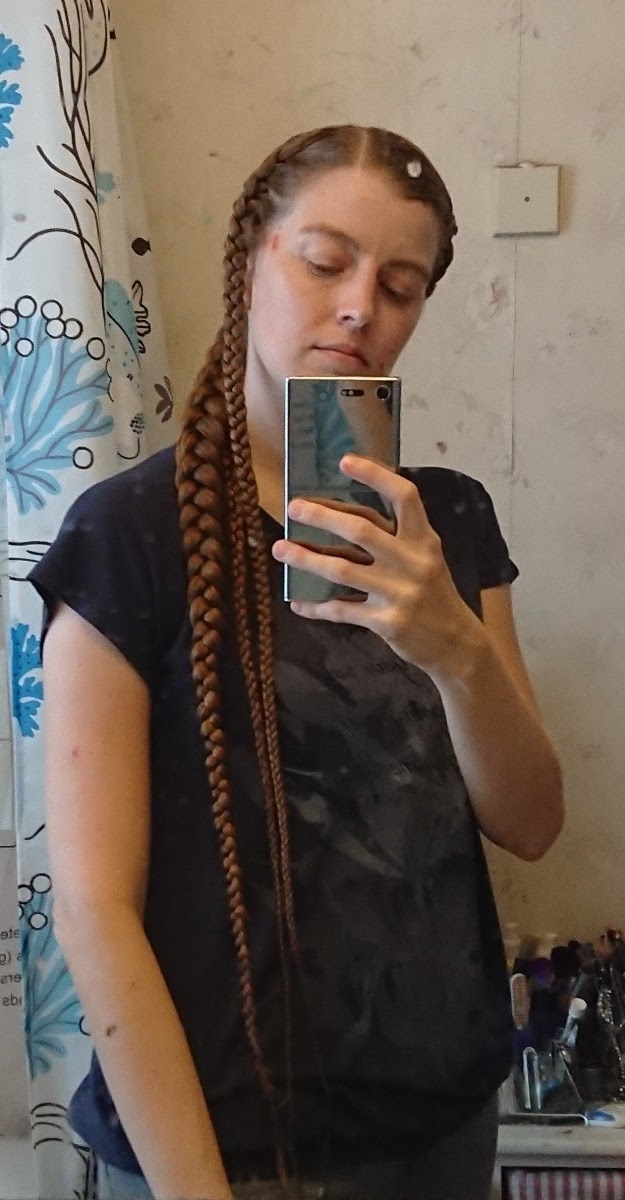 Two asymmetrical front braids and a back braid.
I got really bored braiding those long, thin lengths.
This must be the First World Problems version of the longhair circuit! Look how thin my front braids are compared to Caroline´s: 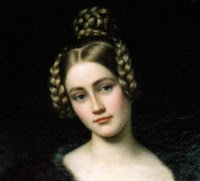 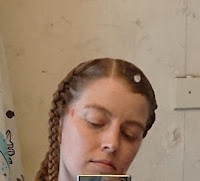 I know this shows my thinnest braid best, but still:
Her front braids are almost as wide as her lips. Mine? Maybe as wide as my nose?
It´s a pretty big difference in the amount of hair in the braids.
Definitely either some false hair added, or some PaintShop. You are still all obligated to laugh at Mr. Igor´s joke. Thank you. 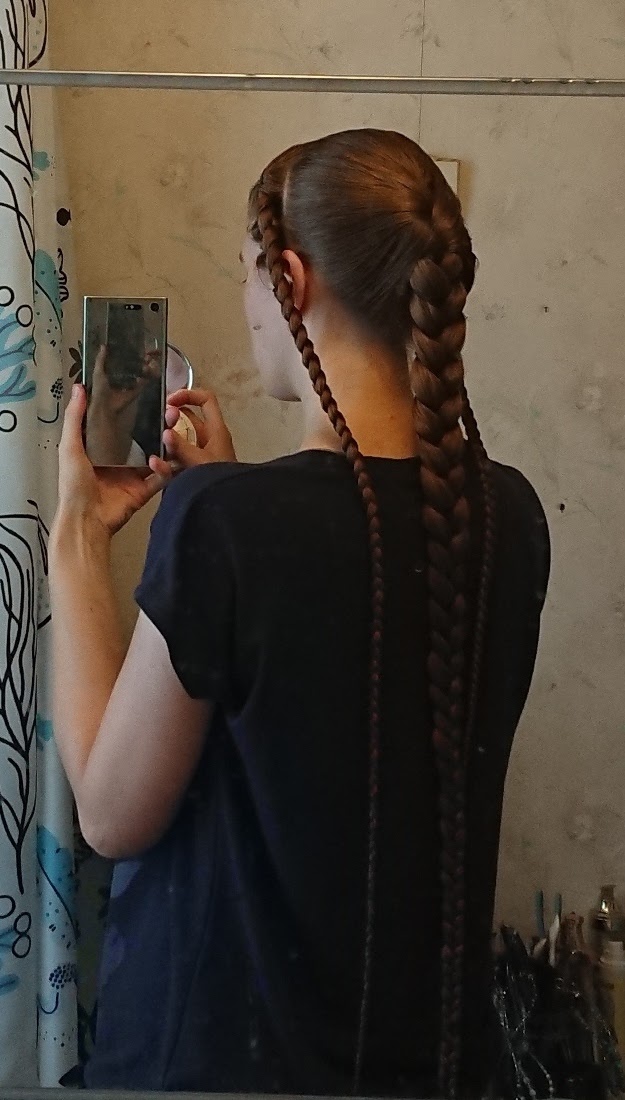 I had the thought I would make a five stranded back braid, but I just couldn't be bothered..... 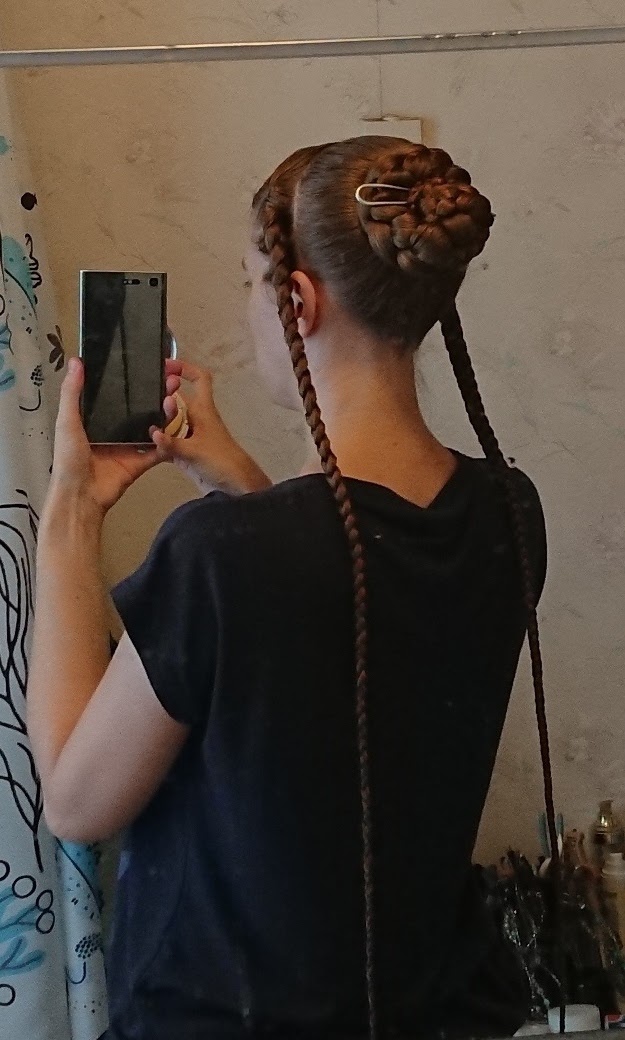 Back braid up in a Nautilus. 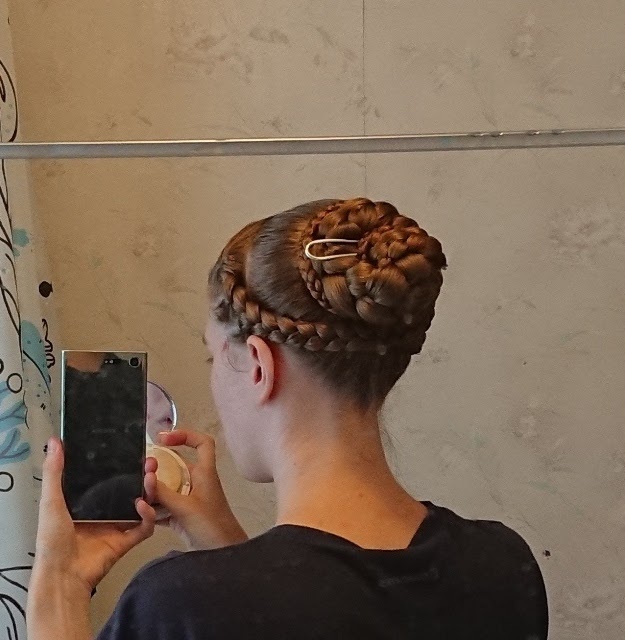 And the two front braids wrapped around. Except that my front braids are wrapped tight around my head, this looks a bit like the pictures Nightgerbil shared of the show Victoria. 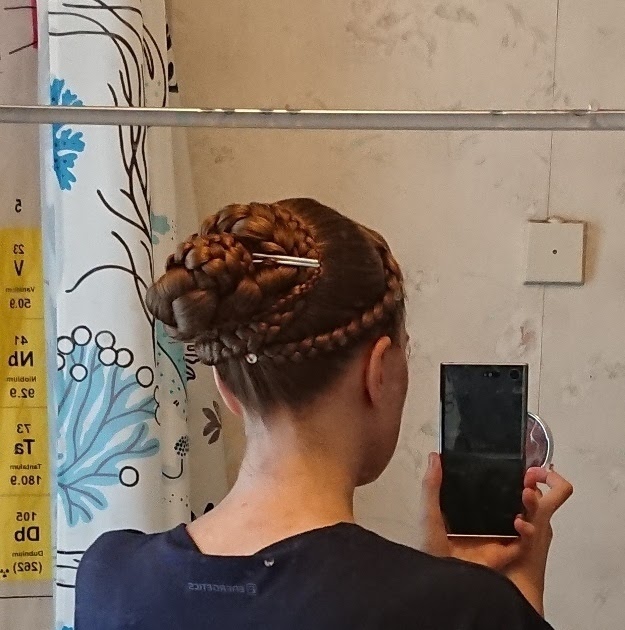 I took this picture to show how just the exactly wrong angle can make any updo look bad. It´s funny how every single updo have that one angle that just makes it look... "Meh". 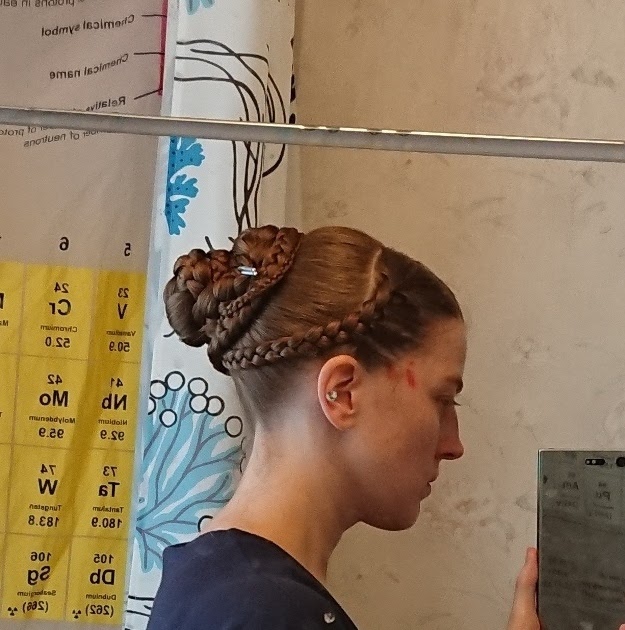 After taking the pictures out of the phone, I realized I had put one of the front braids in the wrong "track". Arrgh! 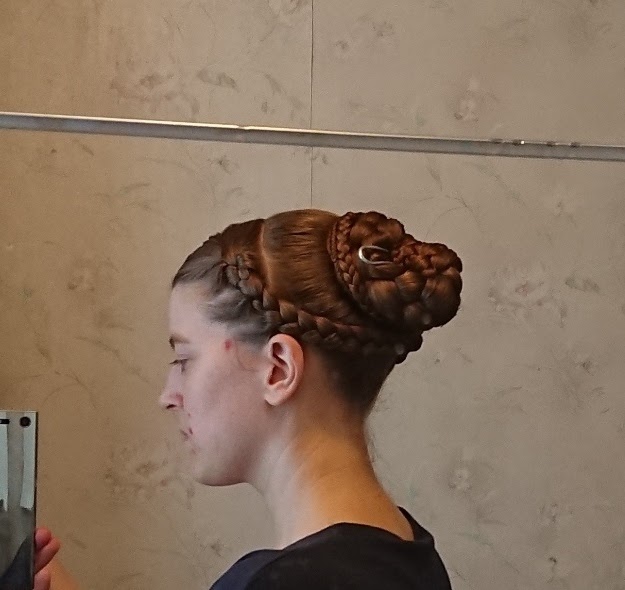 Not so cute at a direct side view either. Nautilus buns can sometimes result in that awkward cannonball-effect where a bun becomes too "high" for the base.
Maybe a Royal bun would work well with this?
The flat, wide Royal bun with the two accent braids could result in some huge head-eating bun. 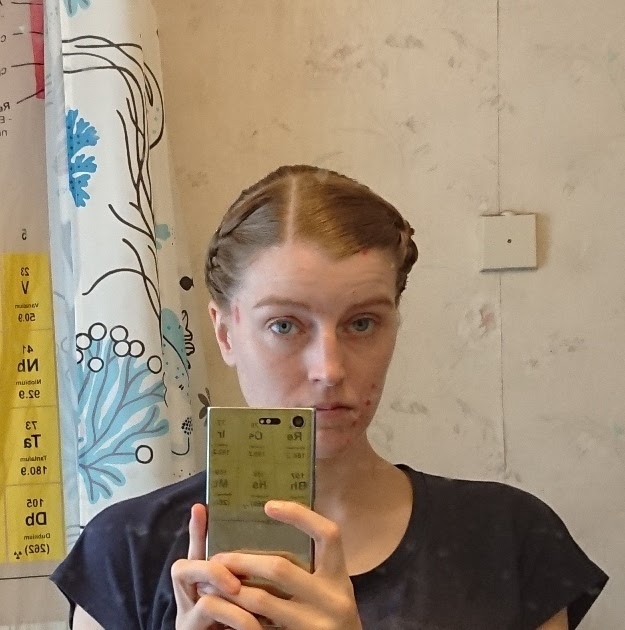 I did like the discrete, face-framing effect of the front braids! 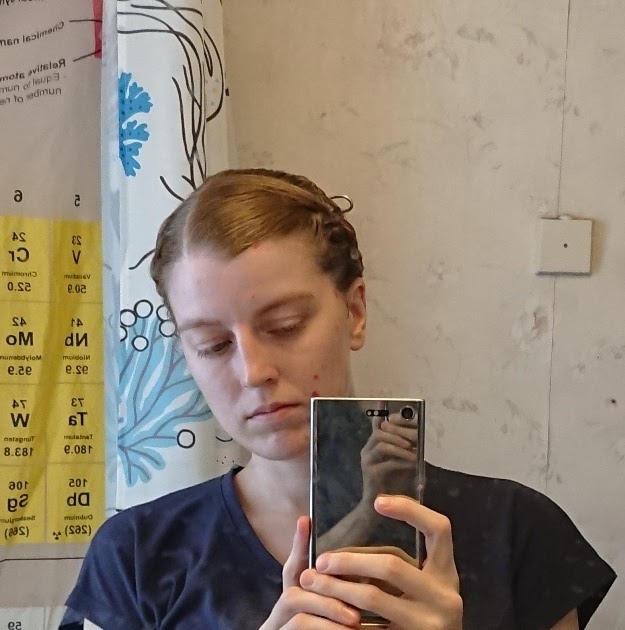 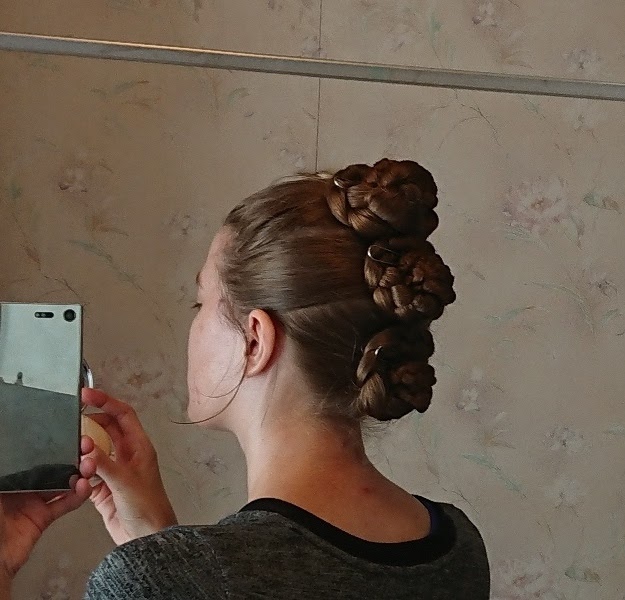 Heh, that turned out pretty cool. I need some pins of a more fitting length though: These are too long, but every other pin I have is too short! 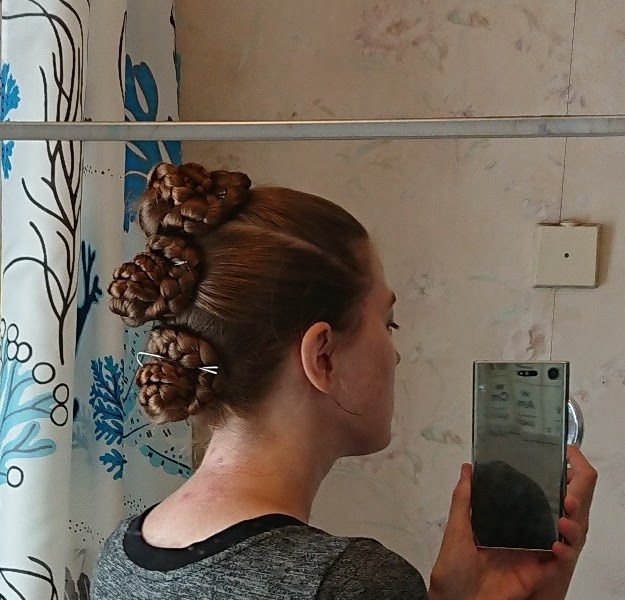 The top bun ended up pretty high on the head though, so every time I saw myself in the mirror, it left me with ½ second of confusion. I'm used to seeing my buns in the mirror, but usually they only show on the side or sort of the bottom of my head? 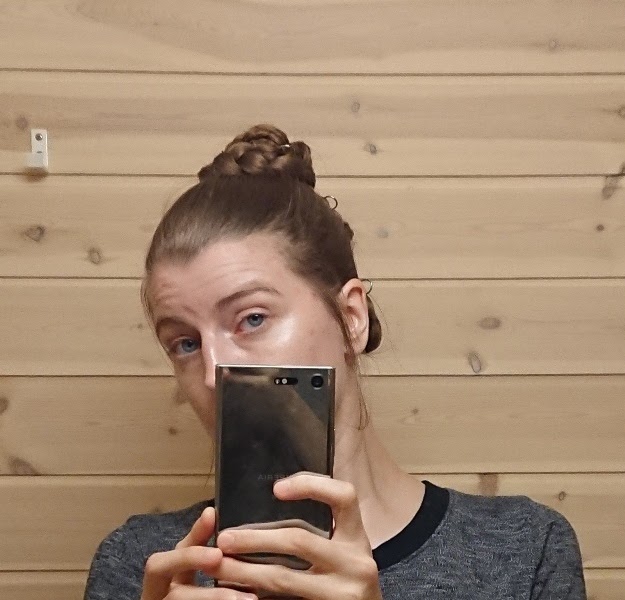 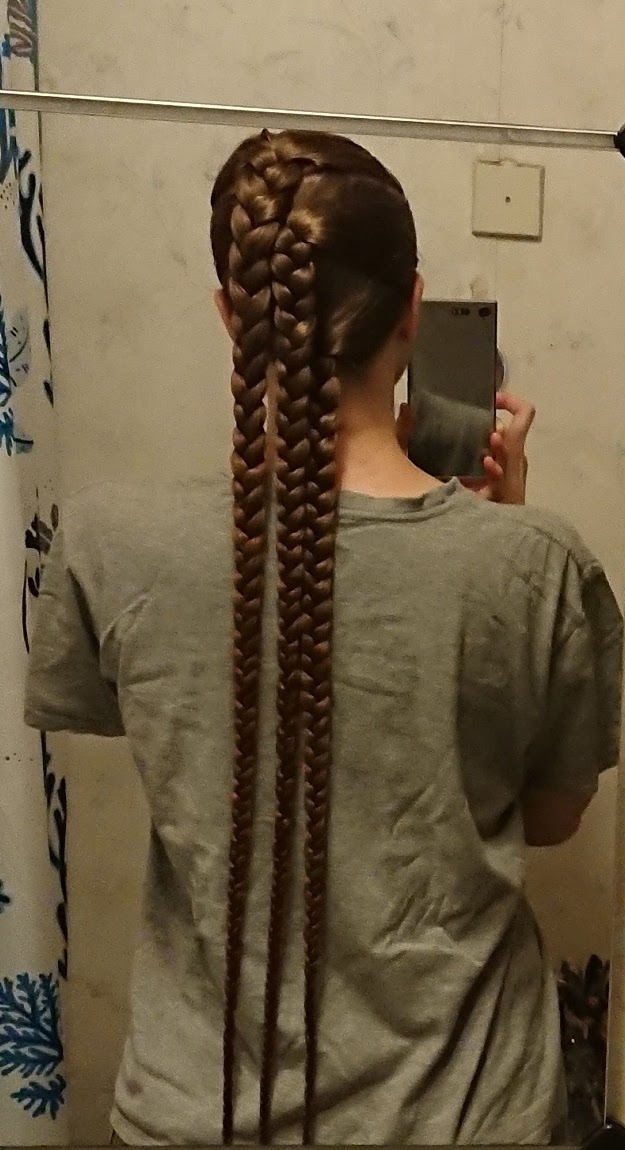 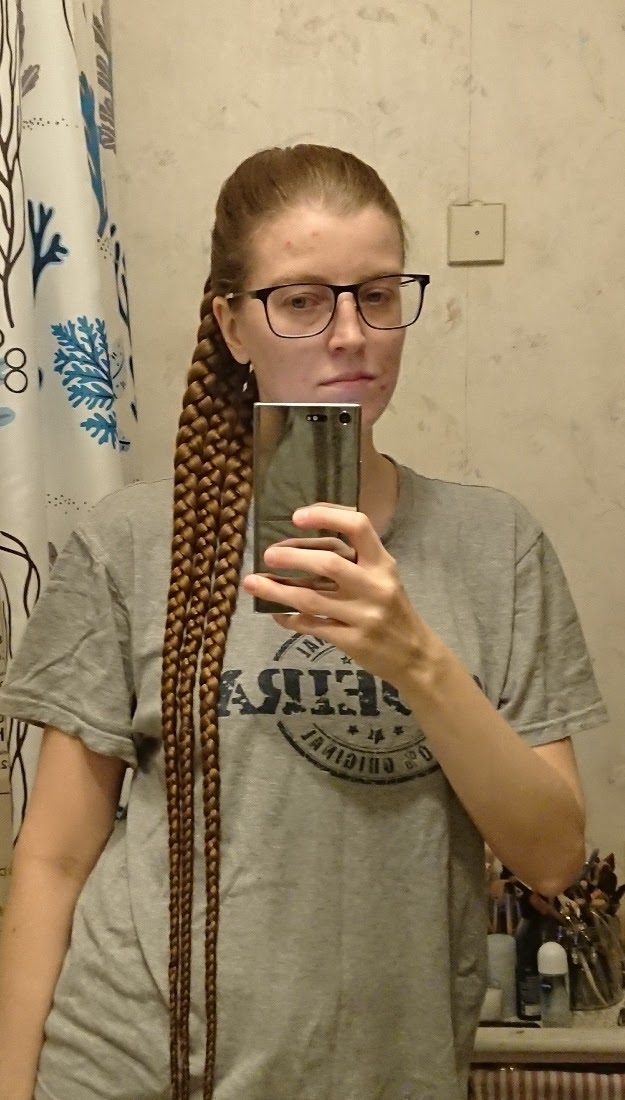