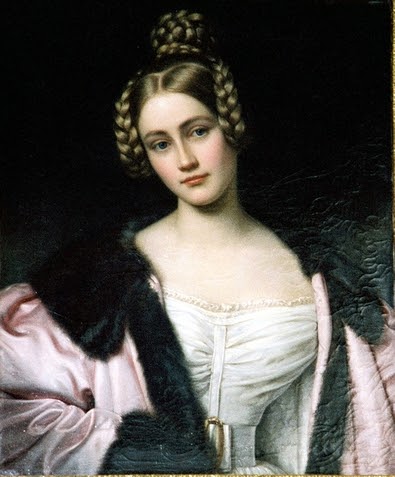 This post will probably end up on the same blog page, so it won´t need introduction. But anyways,  here is the original post on Caroline von Holnstein´s hairdo.

I tried to find something in my closet that was at least pink-ish, but I don´t have any, so I settled for the white shirt as the closest I could get to her clothing. 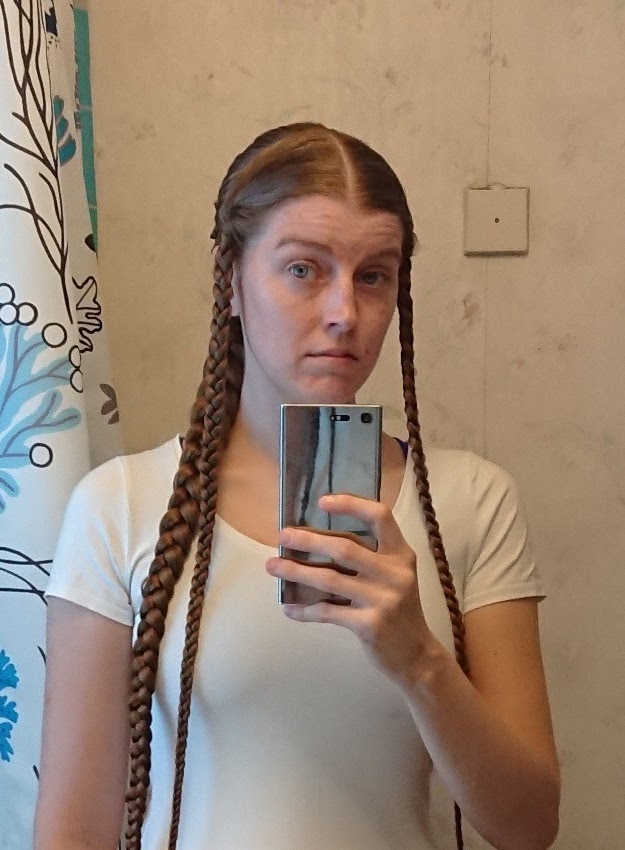 Okay. Not really off to a good start here: I have parted the hair according to what it looks like in the picture, and the two front braids are painfully much thinner than the back. I guess this is why the other blogger who did a style like this took some hair in from the bottom too.

Did she maybe do a five strand braid for the front? A five strand braid will significantly fatten, but flatten a braid. So from the right angle, it will look a lot thicker than a three stranded braid.
Of course there is a strong possibility that the painter made her hair thicker than it was. Only a stupid painter would paint the rich and powerful true to nature, right?

Mr. Igor wants you all to know he called the phenomenon PaintShop. You are all obligated to laugh at his joke. Thank you. 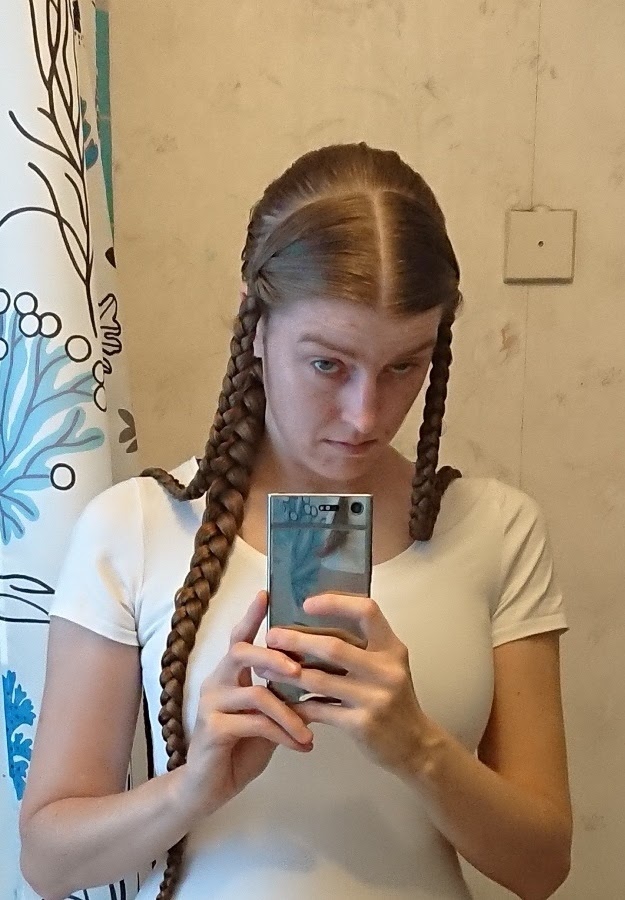 View from the top.
My scalp really hated the center parting. Although my natural parting appears very weak due to just shifting the growth direction a few degrees, there is a lot of strength in the direction of the follicles. It was surprisingly uncomfortable (And unflattering) 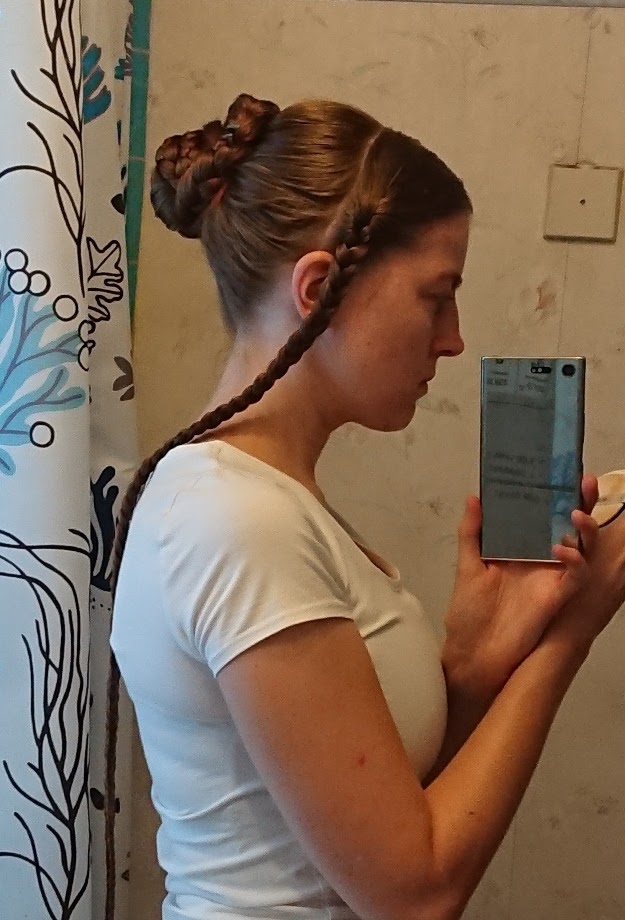 Made a bun out of the back braid and pinned it up. Although I started the braid as high up as I felt I could (Sitting in a chair, leaning back and braiding), I guess it wasn´t high up enough. It slid down a lot as soon as I formed the bun. I think a high ponytail start probably isn´t a bad idea for those interested in recreating this better. 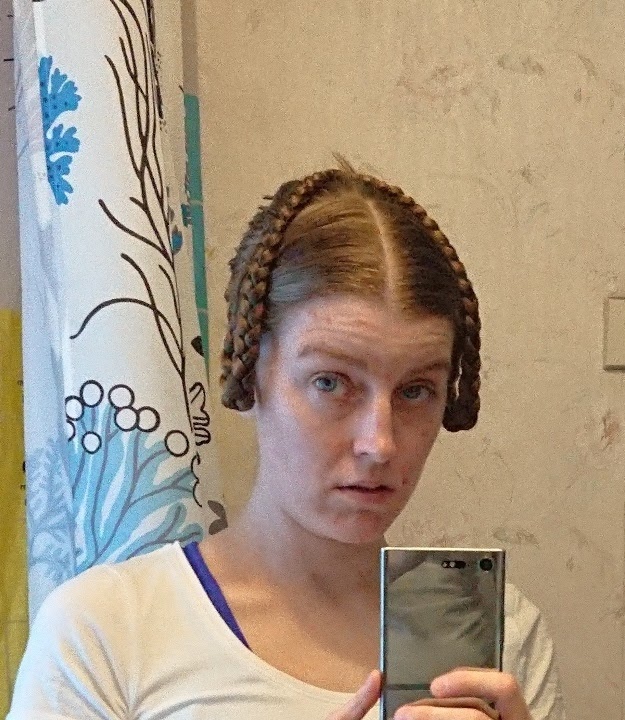 I tried to do the “loop” and then pin the front braids up. But the back bun is obviously too far down. It just looks silly, but then again I can´t imagine adding a tall braided bun directly on top of my head would do much to complete the look?

(And holy shit, do I look tired. Time to take a few days off from work maybe?) 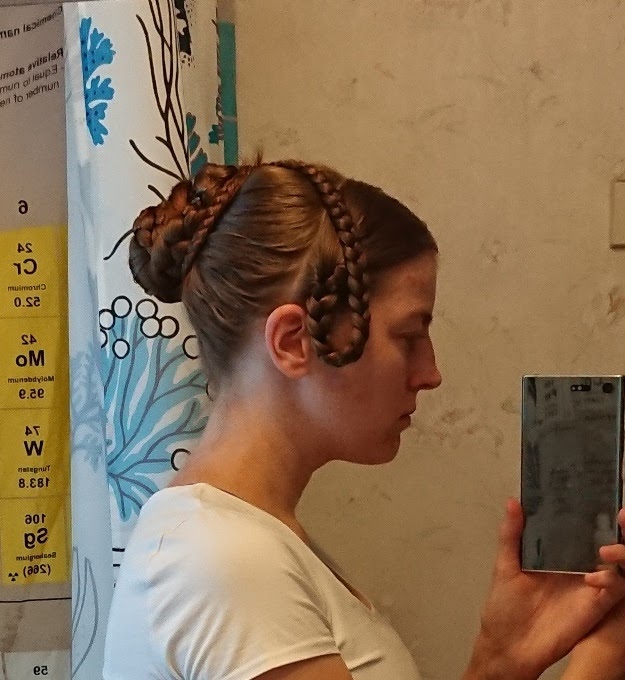 Side view isn´t a whole lot better.  It just looks bizarre. This might be cute if I had wrapped the front braids under and around the bun instead of above. Like the pictures from Victoria that Nightgerbil linked to. 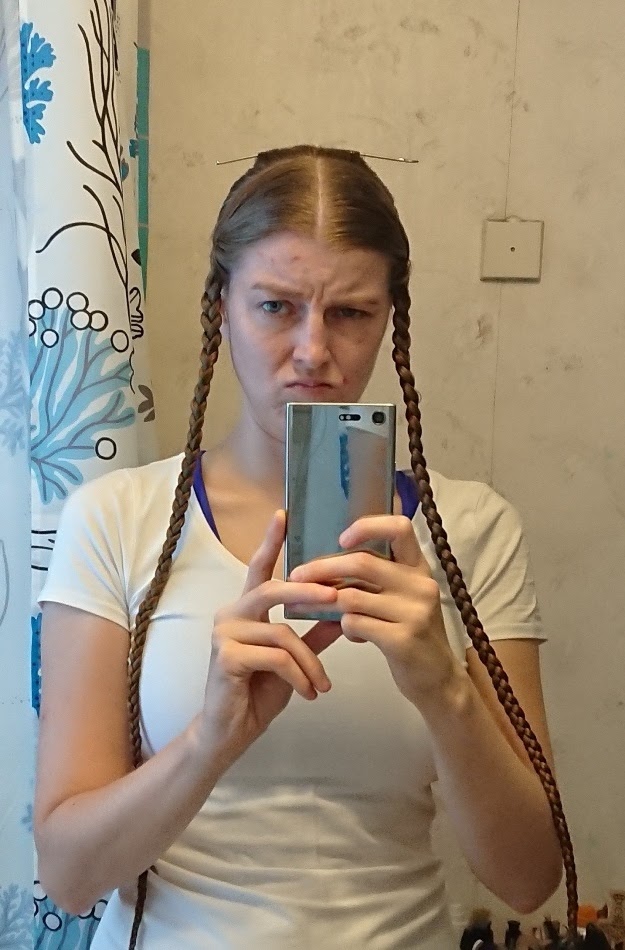 One more try to get the back bun up higher: I poke a stick through at the very top, right where the parting is. Really not feeling like having to re-do this thing, so I´ll see what I can do with the base…. 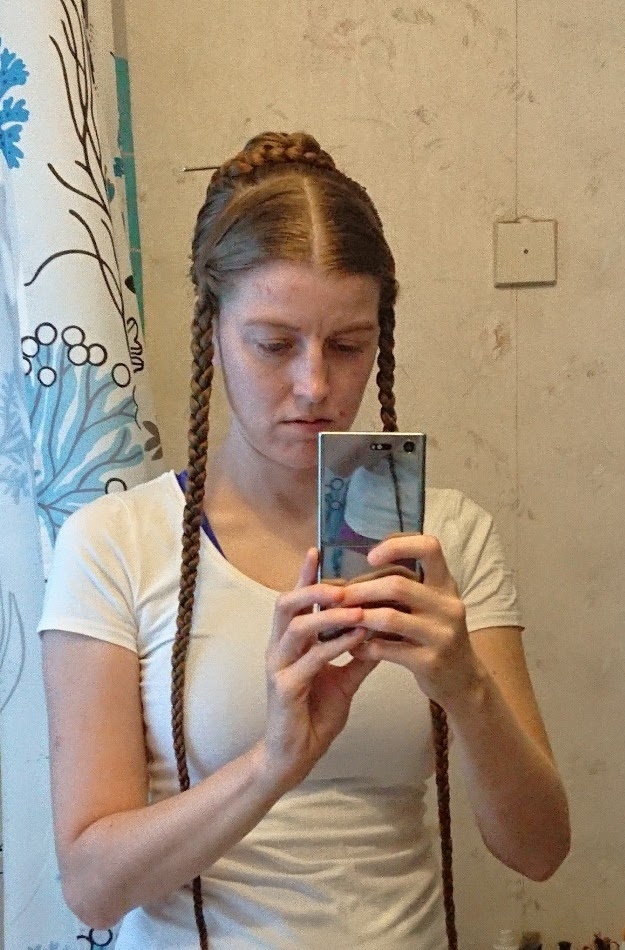 The back braid wrapped around the base of the hair stick into a cinnamon bun. This actually looks like the royal bun a bit. But obviously I´m still not getting it up high enough on my head to get the same effect as Caroline’s. 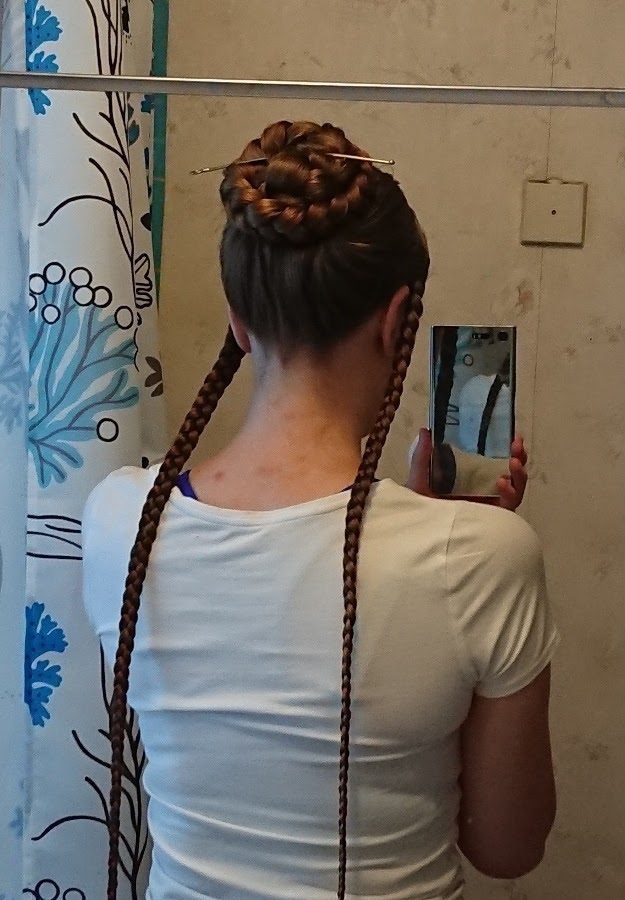 Back view actually looks pretty nice. And again: It looks a lot like the royal bun. 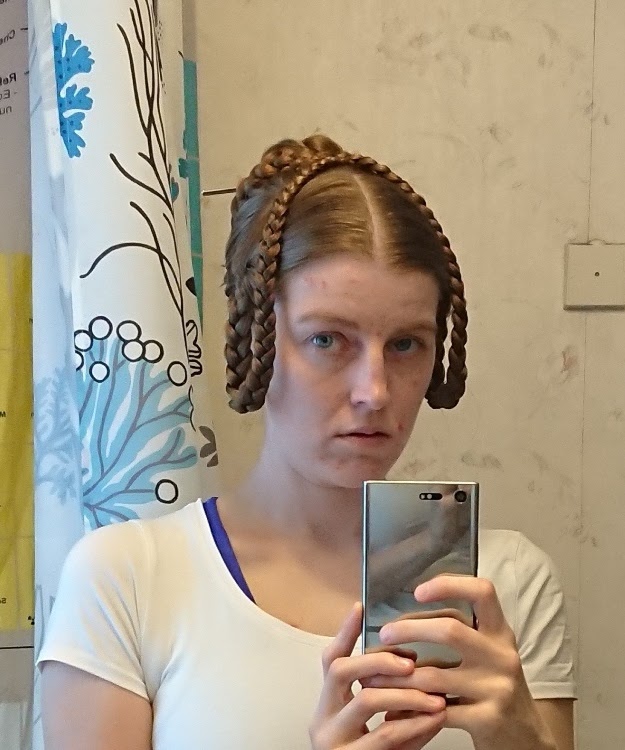 This got a little closer to the original: This time you can actually see the bun from the front, but it´s obviously lacking the height of Caroline´s.

Also this leads me to the observation that I´m having a hard time finding the angle where the front braids doesn´t show up in the right way? In the original, the front braids sort of “disappear” into the updo and doesn´t show their track like mine does. Maybe the front braids are “fed in” in the middle of the back bun instead? Or… PaintShop maybe? (You are all still obligated to laugh at Mr. Igor´s joke. Yes, even when repeated. Thank you)
Posted by Lady Igor at Tuesday, July 24, 2018