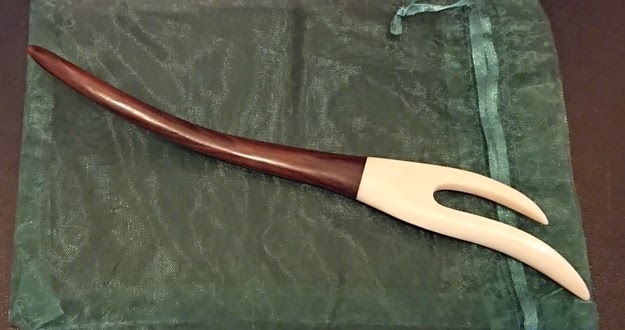 The bone hair stick from WoodArtJewelry got here. That was fast!

I really love the organic forms and the pretty materials. It looks like it could hug the back of my head really well. I will have to wear it and see if my bun will "flip" the stick around like it has a tendency to do with my Quattro's which always end up turned wrong.

I asked my dad (Who has an education as professional hunter) how to care for the bone part. He says any colourless, pH neutral oil, preferably something thin and runny will do. He then suggested trying a sewing machine oil (!) for it. That was definitely something I would never have thought of...

That brings back memories...

The snailcast did a podcast on the evolution of selfcare. I actually like the topic and agree with a lot of the points they made. It seems like selfcare devolved into "whatever people decide it means" instead of a constructive thing to do to help yourself dealing with pressure. Some "selfcare" seems to be quite destructive actually.
Some selfcare is still true to the meaning of the word though: I like this month challenge here.

However, in the beginning of the episode they talk about how Chel from Holy Snails shaved her head. It brought back a lot of memories and was really fun to listen to for me.

Episode 32: The evolution of self-care

I could have listened to a whole podcast on this!
The only thing that bothered me with it, was that she/they at no point talk about experiencing bad reactions to this. But I guess it was too new at that point to have encountered any people with opinions being jerks about something that in no way affect them.

Personally, I really enjoyed having my head shaved, as short as it lasted. It was a fun, but strange and memorable experience. Sort of having tried bungee-jump or something, I guess? Something that I'm happy I have tried, but will never do again.

I did learn a lot about people though. People can be complete and total bastards about something that in no way affects them or have anything to do with them.

Story time
But first a slight detour and some explanation for the story:
I've written about this a lot on my blog before. I have super sensitive skin that takes a lot of careful planning and care to maintain. It sucks now and it sucked worse when I was younger. It has gotten a lot better since I discovered Korean skincare back in 2014, but it will probably never be pretty and flawless. Just ten years ago, it seemed like the western market only had three skintypes: "Normal", "combination" and "trouble skin". Well, I didn't have normal skin, or combination skin, so I would have to have trouble skin, right? And it was troublesome, so it's logical to assume it. So spent most of my skincare time trying to exfoliate and dry out my skin to fix it, based on what I believed was right. Of course I only made it worse.
I learned how people can be absolute and total assholes based on what your skin looks like: The immediate assumption is that you're unhygienic, lazy, possibly stupid and dirty. People will more or less insult you, and then immediately recommend their own products even if they have an opposite skin type from you. All people believe they are good, but most are really horrible, shallow and well, sometimes just plain evil.

Now on to the story itself:
When I moved away from home to go to uni, I made a really good friend. We lived in opposite dorm buildings and pretty much spent all day together every day. She was a big girl. Like, really big. We bonded over how people can be assholes based on your appearance. True story!
Instead of gaining "The freshman 15", she actually lost weight. First unintentionally, I guess because she was removed from mom and dads cooking and had less money for snacks. But as soon as she noticed the weight loss, she started working on eating better and even started exercising.
She unloaded to me how awful it made her feel that people now treated her differently from before. Suddenly she wasn't that fun, fat one in any group.
I felt for her. It's a horrible lesson in human shallowness and horribleness.
We bonded further on this. I have noticed the same reaction when I wear makeup or not.
Then I shaved my head.
Something that in no way affected anyone else. And yet a lot of people were awfully rude about it. I learned a lot about so-called "friends" and their true colours.
But my best friend at the time? The one I thought would be the one who would really understand that my change in appearance had nothing to do with her, and I could use someone to unload on when people reacted "funny" to it?
She was embarrassed to be seen with me.
Yes, you read that correctly.
The one friend I thought would understand what I was going through, was being the worst of them all.
It really hurt.
People are awful. 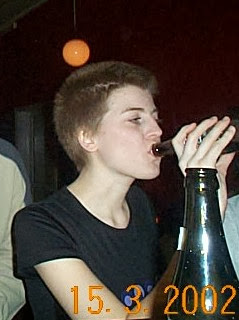 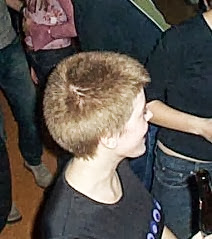 I don't regret shaving my head. It was a fun experience and it thought me a lot about people. If I could go back, I would do it again.
Posted by Lady Igor at Monday, May 21, 2018 7 comments: