This was a value set that Memebox had up for a special offer. Shipping was free and everything!
Unfortunately Memebox has been a little too fast lately with removing sold out boxes from their website, so I can’t link to it.
It contains 10 sheet masks, a cream and an essence.


I picked it because I received the cream in a box once and it was perhaps the most moisturising product I’ve ever tried. I was too heavy for my face, but on my dry shins it kept the skin soft and moisturised until I showered the next day. 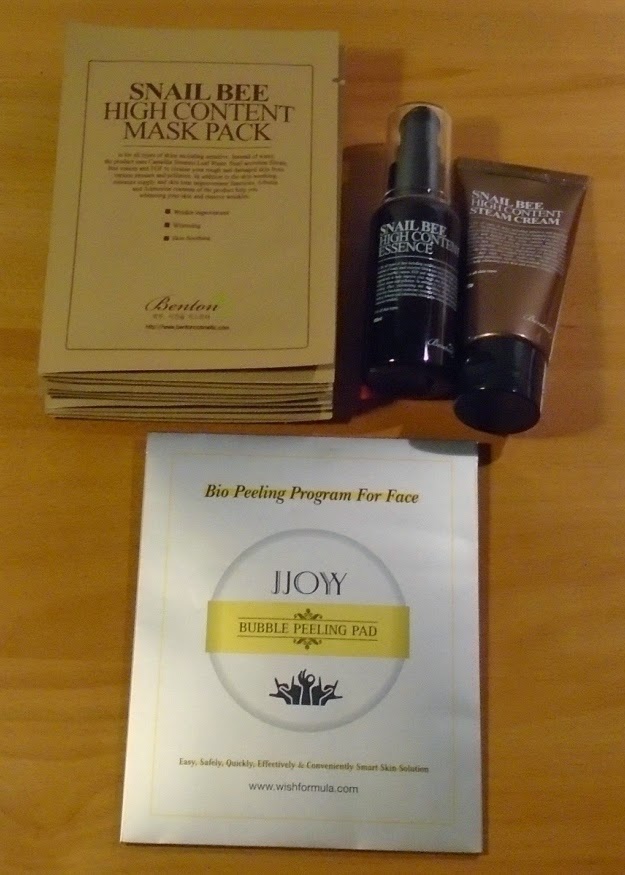 In addition to free shipping and generally being a good deal, it was supposed to come with a free, random item. Some bloggers received full sized, awesome items.

2014 in hindsight: Everything else

Best reads
Dmitry Glukhovsky’s Metro 2033 and Metro 2034. Sure, they have their problems at times, but overall, it’s the most fascinating world in any book I have encountered for a very long time.
The pacing is pretty uneven and the author could really use being introduced of the principle of Chekhov's gun, but still: This is one of he best reads ever for me.

Worst reads
Guillermo del Toro and Chuck Hogan’s The Strain trilogy. I like Guillermo del Toro’s movies. Especially Pan’s Labyrinth was awesome. You would think this sort of pedigree in a book would produce something awesome too, but no. This was just plain bad.
First of all, it stinks of American author with boring, lengthy and completely pointless descriptions of the characters actions and pasts. [Bleep] that. I don’t need to have my characters motivation served on a silver platter like that: I want to be able to decipher them through their current thoughts and actions. This is such an American author thing and I think it should be banned. Ugh.
Second of all, it tries to bring a legitimate medical and scientific approach to explain the supernatural vampire-thing. And it fails so hard that it hurts.
Yea, this was so bad I only got through the first half of the first book. Unfortunately we bought the trilogy. Total waste of money.

Best TV
Metalocalypse. I randomly watched an episode and was instantly hooked just a minute in. It pretty much managed to become my favourite show ever after just a few episodes. This show is absolutely hilarious, weird, entertaining and the music is so awesome.
This show deserves more love!

Worst TV
The Lone Gunmen. Hubby got me the series on DVD for last Christmas and I’ve been slowly chewing my way through them. I was so excited when I first got it, especially when Hubby told me how difficult it had been to get a copy. He couldn’t even get a version with European-friendly subtitles!
You have to admit it smells a bit funny how they “predicted” 9/11 and then the show was cancelled, right?
Yea. No. The show is just plain bad. Bad writing, uninteresting stories, the most irritating and stereotypical bad girl/Mary Sue in TV history, the most irritating and stereotypical stupid blonde guy sidekick in TV history… Bleh.

Best music
Dethklok! The fictional band from Metalocalypse. Bought all the albums and love them.

Worst music
Ugh, so much bad music clogging up the airwaves this year. Luckily I haven’t bought any albums I’ve ended up disliking. I think the point has to go to Nicki Minaj’s Anaconda for slaughtering a fun classic.

Best purchase
My new Sony MP3 player. I love this thing and it was so awesome to replace that irritating ipod!
It makes me smile every time I turn it off and it goes "See you later!".
Damn straight. I will see you later.
*Puts on Sennheiser headphones again*

Worst purchase
My camera. When I used my phone, I would usually just take 3 pictures and use the best one when I transferred them to a computer. Taking 3 pictures with my camera will usually leave me with 3 useless pictures. When it works, it works a lot better than my phone, that's true. But the camera is incredibly temperamental and I now take 7 pictures of everything, just to make sure one is good.
I know I went for something simple, a point-and-click camera, but damn. It really gets on my nerves some times. The consistent "good enough" of my phone seems more attractive some times when I'm going through my pictures!
Posted by Lady Igor at Wednesday, December 31, 2014 No comments:

In 2014 I learned about the Asian skincare routine and made friends with Memebox. The multistep Asian skincare routine makes so much more sense to me! It’s not reinventing the deep dish, but taking your “normal” skincare steps and putting a lot more effort and thought into it.
I thought the extra products and stimulation would piss off my sensitive skin, but it seems alright with it. To be honest, my skin hasn’t improved a lot. I still get redness and irritation, but I think I see more of a “glow” going.
However, even if you compare the “lack” of results, I still prefer knowing my skin has been properly cleansed, toned, moisturized and protected against the sun.

I also invested in a Clarisonic for my skin and absolutely love it.

Memebox was a real obsession for me for a few months, but now I have reached a real point of saturation on the boxes. No matter how awesome a product, I still have backups of it or something similar already. Most of the products have been really awesome for me and the majority of my skincare products are now from Memebox.

I have also taken a real interest in Asian beauty bloggers (Not necessarily bloggers who are Asian, but bloggers who like the Korean skincare methods and the Asian skincare products).
What I like the most about these girls, is that they freely admit how much effort it takes for them to look as perfect as they do. They openly talk about products, routines, getting regular professional facials, plastic surgery, the amount of makeup, the circle lenses and false eyelashes and so on and so on.
Not like the western beauty bloggers: "Oh no, I just rolled out of bed like this!"
Bah. Lies.
I find it a lot more empowering to know how much money and time these bloggers actually, honestly put into looking as perfect as they do. And then having the option of deciding if you actually, honestly want to invest as much effort to get to look like them.
Posted by Lady Igor at Tuesday, December 30, 2014 1 comment:

The great big news of 2014 was me joining the henna-squad.
It’s something I have considered for many years.
I had three reasons to do it:


What kept me from it for years was:


But after a lengthy and thorough testing on some shed hair, I went through with it. And I haven’t regretted it at all.

I had a pretty big cut in September where my mother took off a good . I’ve been seriously happy with it: It took away a lot of fragile ends. Usually when I do my not-so-thorough S&D in front of my monitor where I snip away all ends that looks “off” from my braid, I cut off at least 20. After the trim, I often don’t find any actual splits.
Maybe I got rid of the last bit of hair that was put through styling products because it was too short for a ponytail? Maybe I got rid of the hair from before I transitioned to full CO wash? After all, there's a big difference between 2 CO washed a week and 2 shampooings a week.
I wish I could figure out what part of my old ends I cut out. Unfortunately the CO transition and stopping with the styling products was something that happened before I started blogging about my hair care routine. Booh.
Unfortunately it means I am still stuck in the “knee-ish” length territory. I’ve been around “knee-ish” length since 2012 and I’m sick of it.
I don’t regret the cut, but I’m leaning towards “no trim and make a serious push towards longer length. Maybe I won’t be unhappy with the thickness and state of my ends after the cut?
Well, at least I should give longer length a shot and see what happens. If my ends insist on being too thin and fragile for my liking past knee, maybe it's time to settle for a length I like more: Mid thigh. Mid thigh is still long-long, but it's a lot more convenient for me to maintain than knee.


I’ve been searching for a set of fake bangs that will match my hair colour and texture, but the search will continue in 2015.
Posted by Lady Igor at Monday, December 29, 2014 1 comment: