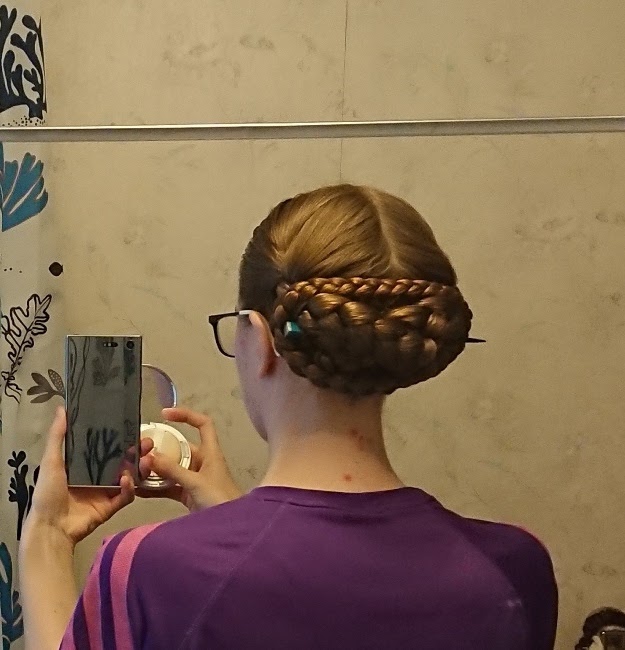 Hmph. I had to run an errand today despite having planned to stay home and study.
Luckily the braids from yesterday held up very, very well, so I could waste as little time as possible on putting my hair up in a bun.
Hairstick is from an Etsy shop called Elk and Iron, that apparently doesn't exist anymore? 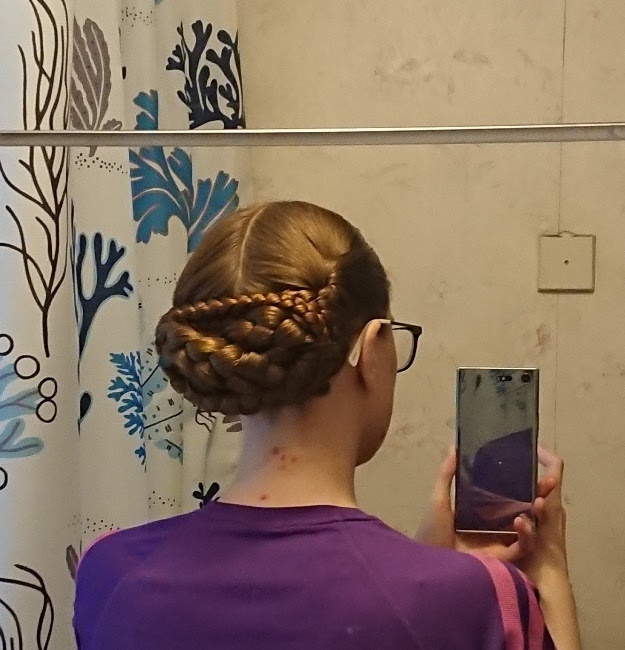 I'm tired of feeling sorry for myself.
So now I have taken today off, cancelled plans with a friend and will spend today and the weekend working on my project. 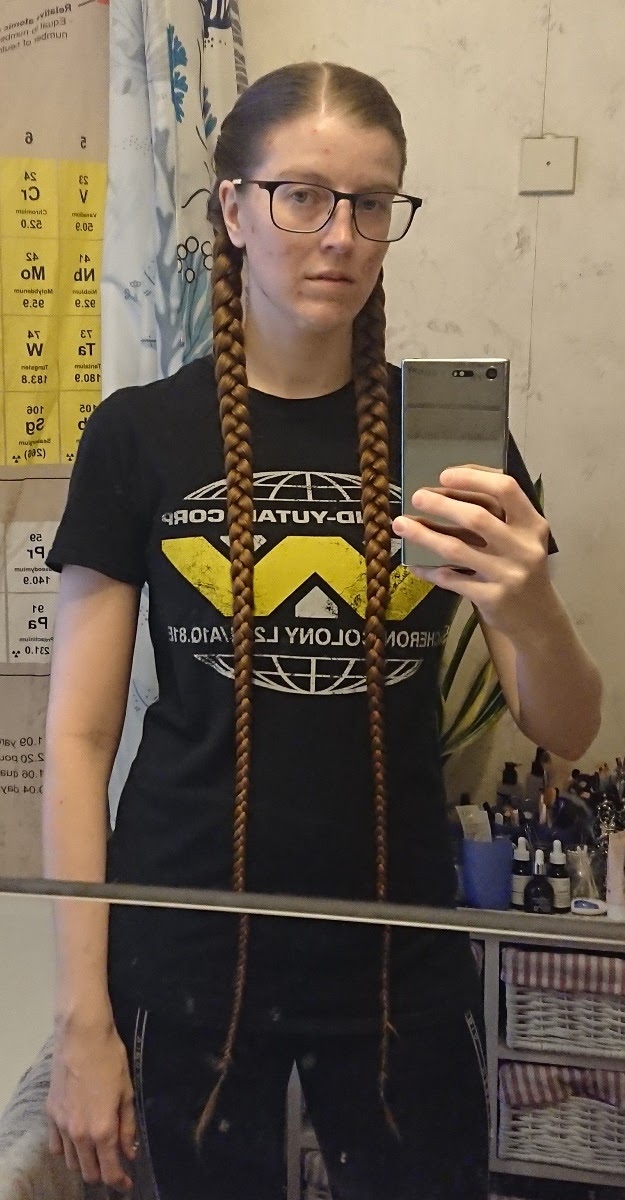 My favorite lounging-around-the-apartment hairstyle: Two braids with a single "layer" of French braiding.
Comfy clothes, coffee brewing...
Time to get this done! 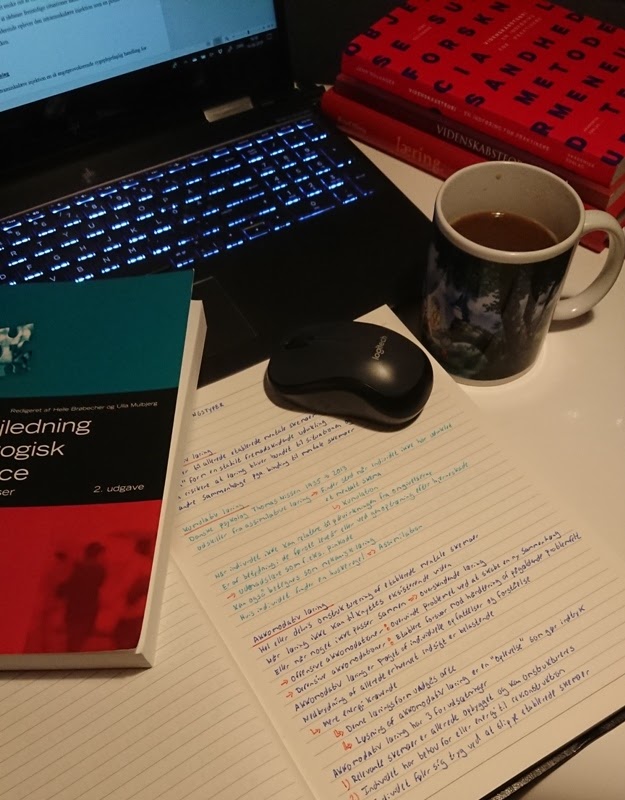 I know I've been whining about this before, but... Damn.

Work and studies are kicking my ass, more than expected. But I've been feeling tired for months, even before I started my current course.
I think the reason is that we skipped the "usual" vacation around February-ish.

End of January, all of February and the beginning of march is the time of the year I hate the most. Especially February. The cosiness of Christmas and the fun of new years is over, and spring is sometimes very, very far away depending of the weather. It's just cold and grey and nasty and depressing and you can't even tell what time of the day it is, because often there isn't even a hint of brightness in the sky to tell you where the sun should be.
It's a time of the year that just drains my mental batteries until it feels like I'm just running on pure willpower and spite. I hate it.

And this year we made the mistake of not running off to somewhere warm and awesome for a week. I feel like I have just drained my batteries to a point where even summer slowly creeping in can't really refill them.
Or maybe it's the fact that my last actual vacation was back in September. But since it was a family-vacation on Læsø, it really wasn't a proper vacation. Fun yes, and a nice family tradition, yes, but a real relaxing vacation no.

The last proper vacation was... Back in April 2018 on Tenerife? Yikes.

We have planned a week of vacation with friends in July, which I'm very much looking forward to. And of course there is another week on Læsø with my family this year again.

But what I want is pools, palm trees and fresh fish by the ocean side.

I have learned from my mistake and already ordered next years vacation: Two weeks on Fuerte Ventura in the end of January and beginning of February. It actually fits perfectly in before my next university course, so this is perfect.


I'll see if I can do other little things to unwind before that...

I'm on the hunt for a new spa. I wasn't impressed with the one I went to at all, and they are very pushy to sell your their products. Like, if your products were half as impressive as you claim, I would automatically want to buy them if your treatments impressed me. Duh. So a spa-treatment that should be fun and relaxing, is ended with an annoying and stressful salesman's speech.
Thank you, next.

My skin is really unhappy because I'm unhappy, and that makes me even more unhappy.
Great.
I really should put a little more effort into my skin though. It's a good little unwind-ritual...

I'm considering getting this LED facial mask: Dr Dennis Gross DRx SpectraLite FaceWare Pro
It's very pricey, but it will be a step up from my hacked Neutrogena mask that I use and like. It's a nice and relaxing little treat to "shut myself in" behind that thing and just ignore the world for a while.
There is also a smaller eyes-only mask intended to reduce eye wrinkles, but I'm not so interested in that one.
Does anyone have any experience with either of them?
Most thorough reviews I find seem a little suspicious to me.

Also considering getting this: Foreo UFO
It's funny, I've noticed that one before but found it a little dumb. But now I realized that this is basically made for what I use my mostly unemployed Foreo Luna 2 for: For massaging essences, serums and lotions in.
Hm, why not get the device that was actually designed for doing just that then?

Right now, all of that is sitting in my wishlist, but it got me thinking: I have never really wanted anything ridiculously expensive for my hair.
For tools and toys, I'm such a minimalist that I don't even want the expensive stuff. It's usually overdecorated and not my style at all.
For products, I always find myself being suspicious, because there is only so much you can really do with a haircare product.
I've seen products boasting stuff like caviar, and I always think hah, like that can do something that good old panthenol can't?

But then again, maybe it could be fun to try?
Why not try some ridiculously expensive brand name conditioner?

Or maybe a Mason Pearson brush (That I will then never, ever use because I brush maybe once a year, and then only to get rid of some flakes)?