I have a few thoughts I want to share on this haul, as opposed to the last which was just "Pretty things I wanted". 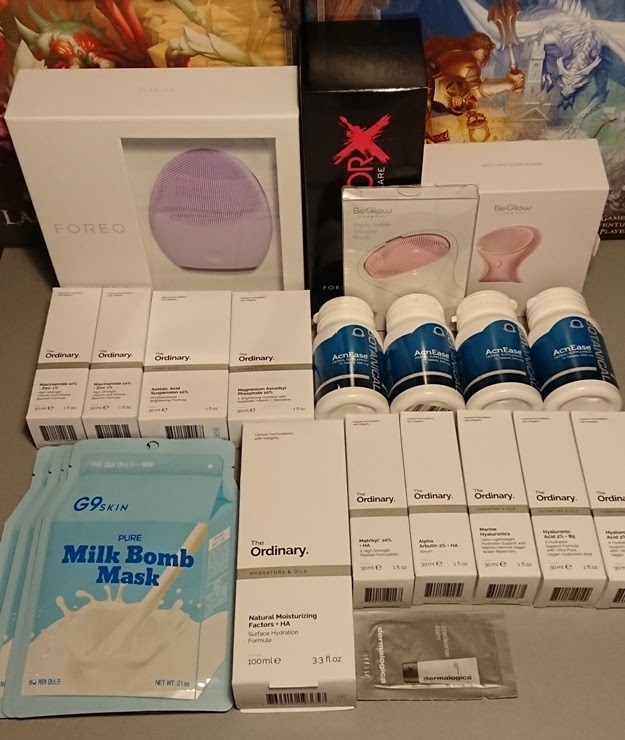 Some time ago I was shopping with Nurses Assistant-friend and at a beauty counter, some sales representative tried to convince me to buy some horrible facial mask. It was obviously full of colour, and so full of perfume it smelled awesome even with the lid on, so there was no way I would ever allow it to touch my sensitive skin. After the shopping we had coffee and I bitched about how amazingly ignorant people can be about skin: It really seems the knee-jerk reaction to sensitive skin is to want to exfoliate and dehydrate it into submission.

Nurses Assistant-friend is considering getting into a nurses program for the explicit reason she wants to work as a cosmetic nurse in one of the many dermatological treatment-stores popping up. So she's a huge skin nerd, just like me.
We have very different skincare concerns though: She has olive skin with a tendency to get dark spots, so it's always interesting to compare the latest and greatest.

Anyways. Nurses Assistant-friend made a comment that I don't think she realized how clever it was: She asked if I was really sure I actually didn't have acne prone skin, since I pick at any imperfection and will have destroyed any comedones before they reach the surface.

It felt like one of those "Is everything I think a lie?"-moments and I had no good answer for it.
The thought have been stuck in my head ever since though.

For like half my life I have firmly believed I have very sensitive, slightly dry skin and that my dermotillomania complicates it. But do I really have very sensitive, but acne prone skin? And do I intend to change my skincare focus and routine to see how my skin reacts?

And this is the real problem: My skin really doesn't like any of the typical ingredients used for acne. Ingredients like benzoyl peroxide, azelaic acid, salicylic acid and especially alpha hydroxy acids makes my skin very unhappy. So... What is left to try?
Well, pretty much retinoids and so, so, so many different supplements. 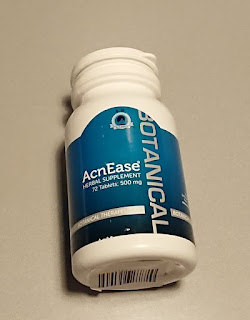 On a whim, I ended up ordering some bottles of AcnEase mild treatment with a previous "generally pretty things I wanted"-order. I started taking 2x2 pills a day, which is like half the dose recommended. I figured there was no reason to piss my skin off, and I really wasn't feeling up to commit for more pills than that.

After a week, my skin started feeling strangely itchy and red spots began to surface.
Now, this is usually where I would tell anyone else but myself to abort mission!
I really don't believe in the idea that skin can "purge": As an organ, skin has a lot of functions, but none of them is to excrete anything other than water, salts and some sebum. Not "toxins" or "waste". And usually those who use the argument, use it to sell you crappy products. So in my book, they discredit themselves by having an agenda.

But... This itchiness felt weird. Like, deep inside the skin. Like something was coming out.
I decided to stick it out and see what happened, with the already opened bottle.

It started in a crescent shape on only the right side of my face, around my mouth. It spread and faded out in all directions over the days. Then suddenly, I found zits appearing. Like, actual zits.
Normally I get a real, actual zit maybe every other week. But Nurses Assistant-friend was in my head with her comment on how I probably destroy any comedones before they reach the surface of my skin.
So I stayed on the mission with the supplement, kept up with my normal skincare routine and removed the emerging zits with an extractor before covering them up with COSRX's master pimple patches.
And slowly, the irritated areas got smaller. The redness faded and the zits went away. Just in time for me to decide if I should start the next bottle or not.

So... Did this help?
I actually think it did. Well, at least enough to have repurchased four more bottles.

But I still don't believe in the "skin can purge"-theory. I got my first Clarisonic in July 2014. I love those things. Seriously!
Where my skin loathes acne fighting ingredients, it has always loved the Clarisonic. Which is strange, because most guides to sensitive skin will tell you to go for the exfoliating ingredients instead of the mechanical exfoliation/stimulation.

I found I had only one replacement brush left from previous time I ordered, and was going to order some new ones.
But... The Clarisonic Aria that I bought back in April 2016 has now been discontinued. And Clarisonics website had no intention of informing me which, if any, brush heads are compatible with that model. That really pisses me off. It feels like Apple-methods to force customers into buying a new model instead of being able to continue using what should have been a perfectly functional product.

I hate that kind of intentional, forced consumerism. 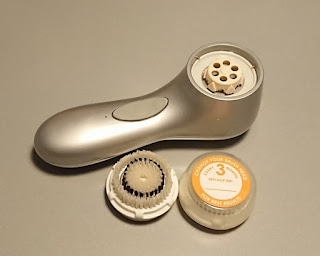 So as an experiment, I have bought a Foreo Luna 2 and a BeGlow Pura to see if I could learn to like one (Or both) of those instead.
Both are silicone, which is better than the Clarisonic brushes for preventing bacteria growth. The Foreo feels sturdy and has a beautiful finish. The Beglow feels a lot cheaper and more "plastic", but you can replace the silicone "brush" head.

I will give it a month or so before deciding if I should cave and get a new Clarisonic model and a bunch of replacement brushes... 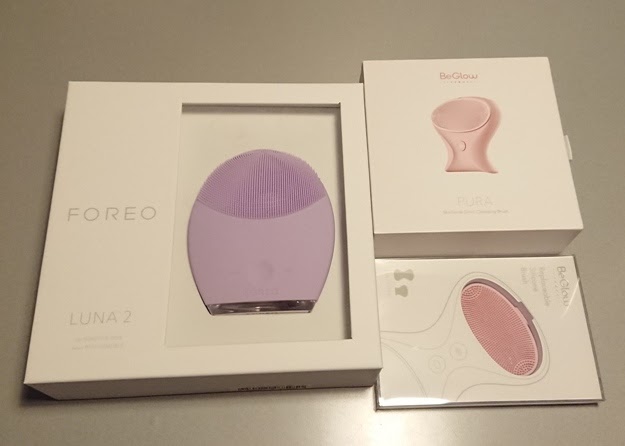