My new Elk&Iron sticks made me curious.
How heavy are my hair toys? 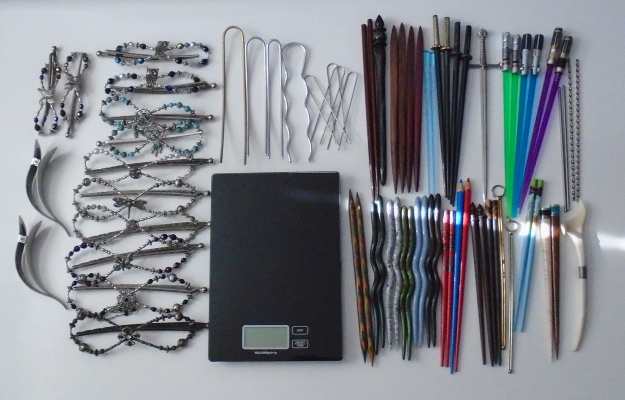 Not all hair toys in picture!
I have a bunch of sticks I never use and I didn't bother to weigh those.
Hm. I should throw those out. All they do is take up space and help unbalance the stick-jar.

The XL Flexies surprised me. Despite being a lot smaller than the XXL ones, yet they weigh so much in comparison.
The XXL greenish one I forgot name of weighs the same as one XL night owl. The XXL tree of life weighs less than one XL dream catcher.
I guess the weight really isn’t in the mass of the 8 or the stick, but in the decoration.

The Ron Quattro forks are so light! No wonder the single Starlites are my go-to!

It’s funny how the single sticks mess with your head.
I would swear up and down the single TimberstoneTurnings stick is the heaviest single stick by far, but it’s only heavier than the bone WoodArtJewelry stick and the hair sword.
But it’s no surprise that the large, massive wood Ric the combmaker sticks are the heaviest set. Or that the simple Ron Quattros are among the lightest.
Posted by Lady Igor at Wednesday, August 26, 2015