Something smelled in one of the boxes because I got a weird whiff of something as soon as I opened the grey cardboard box it all came in. It lingered around the apartment, but I haven’t been able to determine for sure which one item gave off the weird stink.

I don’t know why my camera is acting up like this today. None of the pictures I took were very sharp or good. It looked good on the display but once I transferred them, they were all bad.

Memebox superbox # 61: My cute wishlist 3
On the pamphlet it says it’s a superbox but it isn’t. Stuff like that annoys me more than it should. This box is supposed to contain the cutest of the cutest in packaging and products. I only do limited amounts of “cute”, so I was a little worried this would be a pointless box for me. 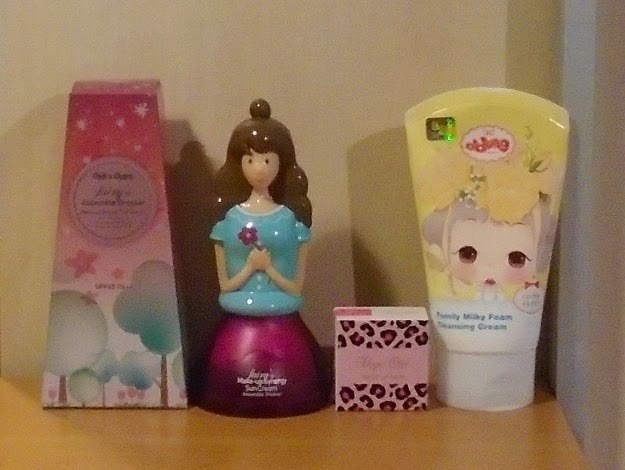 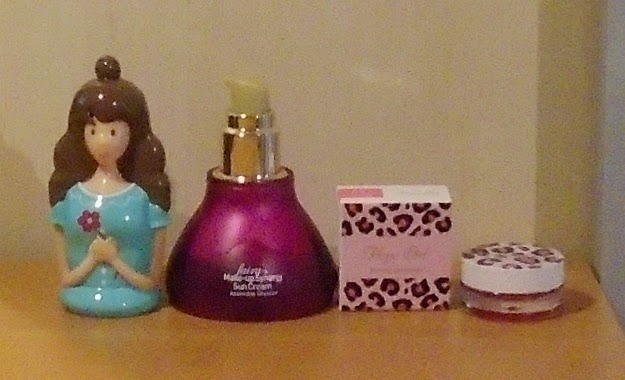 Hope Girl tinted lip balm in 03: Hot cherry
Okay, first of: The packaging isn’t cute. It’s tacky. Pink leopard print? Yea: Tacky.
Second: I hate lip balms that without any kind kind of applicator. Am I supposed to just dip a finger in there? Or have a lip brush with me as well?
Colour me unimpressed. Since I’m pretty much stocked up on lip products at the moment, this will be stuck in my sell/trade/gift-pile for now.

Shara Shara Fairy’s make-up synergy sun cream SPF 45 PA ++
Eh… I think the cardboard box is actually cuter than the plastic bottle. Also the bottle itself is just too big for just 30 ml of product!
It will go into my sell/trade/gift-pile and hopefully I can find someone with a daughter of the right age to take it. If not, I will probably empty it into some other container.

Ddung Family foam cleansing cream in 02: Family milky foam
Okay, I realise I’m difficult here: I think this looks like an ordinary K-beauty product and it doesn’t impress me. But the more “done” packaging like the sun cream above annoys me because it seems to try too hard to be super cute. Eh. Yea, I’m difficult.
But I guess it really is difficult to find “extra” cute products when Korean products are often cute by default.
I’m happy receiving a foam cleanser though. I’m stocked up on all sorts of moisturising products but I only have the charcoal cleanser I got in the Earth&sea box. 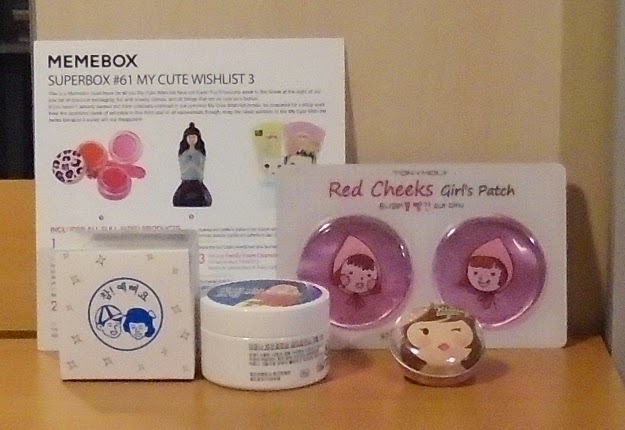 Shara Share kissing sugar lip scrub
A lip scrub. Eh. Into my sell/trade/gift-pile with it.

Youngwoosa Oh! It’s lovely and soft cream
This packaging just isn’t cute. At all. The cardboard box has a childish pharmacy thing going on and jar itself is boring white with some seriously fugly art on it. Not. Cute.
Also I suspect that this is the product that stunk up the box. I tried it on my dry shins and even though it doesn’t smell 100% like the smell from the boxes, I think this is the source. It has a smell like hoof oil, not actually unpleasant but not pleasant either. It’s just odd. Like a hint of tiger balm in there or something. Hubby says he thinks it smells like when you walk into a beauty store and you have a million odd smells going on at the same time.

Tonymoly Red cheeks girl’s patch
This is for soothing dry, red patches, especially the cheeks. I think it will be good for winter.

Verdict
Hmm. Yea, not impressed with the My Cute Wishlist box.

Memebox special # 43: K-style 3
I considered opting out of this one, but in the end I decided to get it too. Usually my makeup consists of foundation and some blusher and on fancy occasions concealer, foundation, blusher, white eyeliner and mascara. But now I feel I would be up for experimenting a bit more. 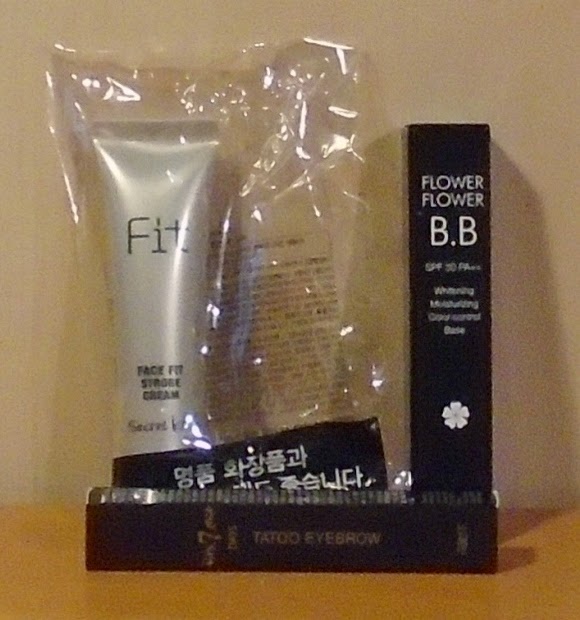 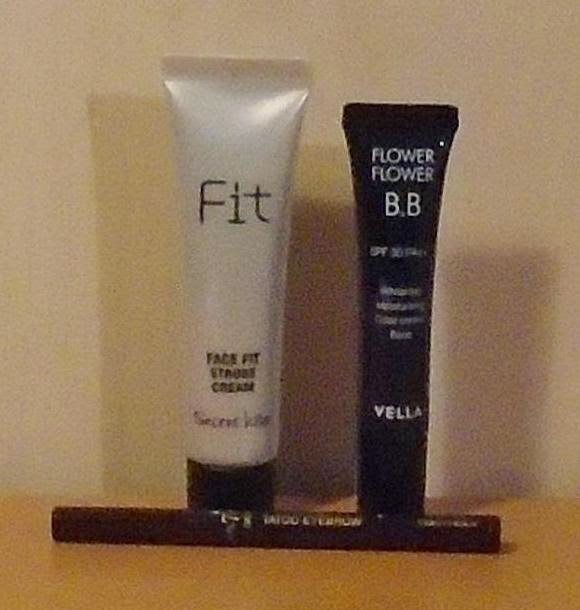 Secret kiss face fit strobe cream
So this is a makeup base but can also be mixed with foundation and also be used as highlighting?
Alright. “Made from 6 kinds of gemstone powders” it says. It came in a funny plastic bag that seriously looked like it had come for free with some magazine.

Vella Flower flower BB
This seems to be a perfect match for my skintone. I’m seriously weirded out by this! This is the third foundation-type product I’ve received through Memebox and the third time it’s been a perfect or seriously-close-to-perfect fit!
I am 1/16th German, 1/64 Spanish and thus 92% (Plus a bit, but who cares about decimals when it comes to this) Danish and yet standard Korean foundation products fits my skin?

Tonymoly 7 days tattoo eyebrow 02 dark brown
First thought: Eyebrow pen, yea, that’s a waste on me.
But then I figured I could use it for eyeliner. It has a fine brush tip that will probably be perfect for tightlining.
It says it can stay on for up to 7 days, but it washed off 95% after just swiping it with a wetwipe, so… lol, no. Not that I complain about that: It would creep me out if it had that crazy much staying power. 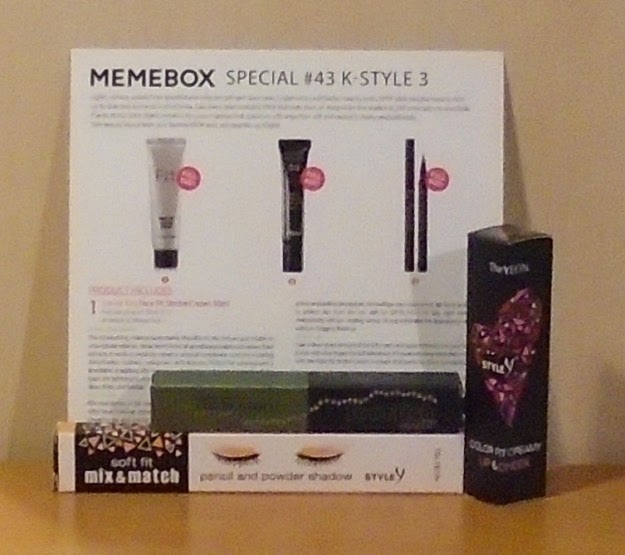 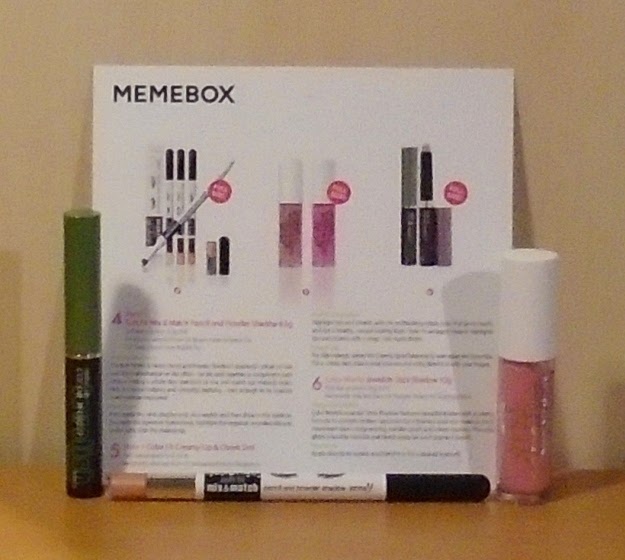 Style Y Soft fit mix&match pencil and powder shadow in 02: Brown liner & peach tip
This is the hit of the box for me. I’ve been considering a similar dual-end product at ELF, right down to the colour. It has a medium brown liner and a peachy brown powder shadow.
The colours and colour combination are perfect for me!

Style Y color fit creamy lip & cheek in 02: Smoothie pink
Wow. This is a new for me. Normally I can’t get my colours light enough, but this one manages to wash out all colour in my face! Sell/trade/gift-pile.

Color World jewellish stick shadow in 05: Twinkle green
I quite like this one actually. Easy to work, easy to build. Glitter flakes are a bit too large for eyemakeup in my opinion, but really not bad. 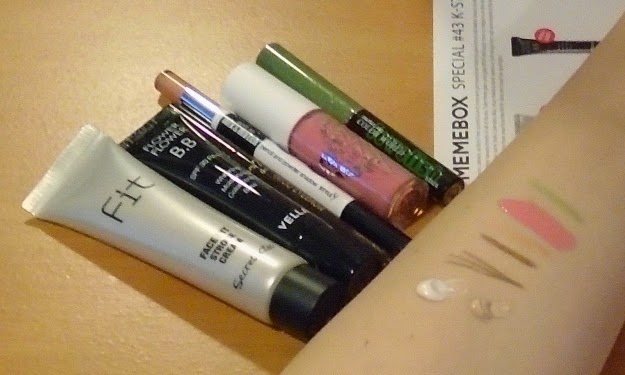 Swatches all lined up
Verdict
I'm very happy with the K-style box!

Memebox special # 32: OMG 3
The previous OMG box really failed to impress me, so I actually considered opting out of this one too. But the OMG box feels like a “must have” to see if they would have some whacky exotic stuff to try. 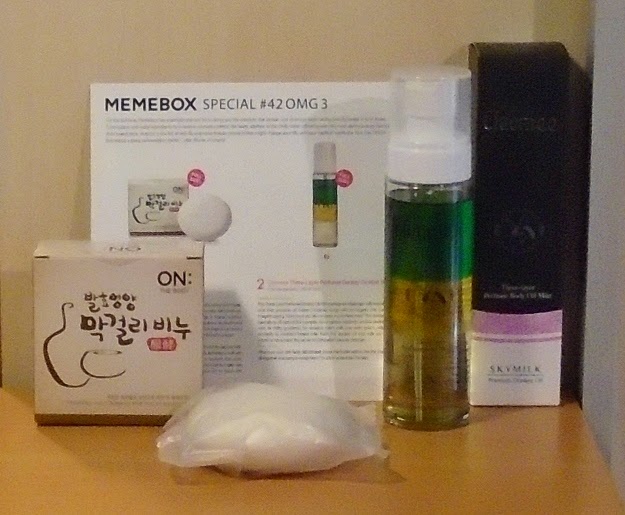 On the Body Makgeolli Soap
Another soap? Ugh. Sell/trade/gift-pile.
What makes this OMG anyways? “Makgeolli is a milky white rice wine made from fermented rice, wheat and water”. Has a lengthy explanation of how you should use it. Eh. Not impressed. Soap is soap. Needing 10 minutes on your skin to work (or whatever) only makes this a bad OMG.

Cleomee Three-Layer Perfume Donkey Oil Mist
Okay, I give. This is pretty cool. Not sure if I count it as OMG or not though. It’s made with donkey oil and donkey milk. Pretty cool. I guess it’s the same as emu oil which I’ve seen in quite a lot of products by now. It actually feels rather moisturising on the skin, but doesn’t leave a nasty residue. I like and I would buy this as a body lotion too. 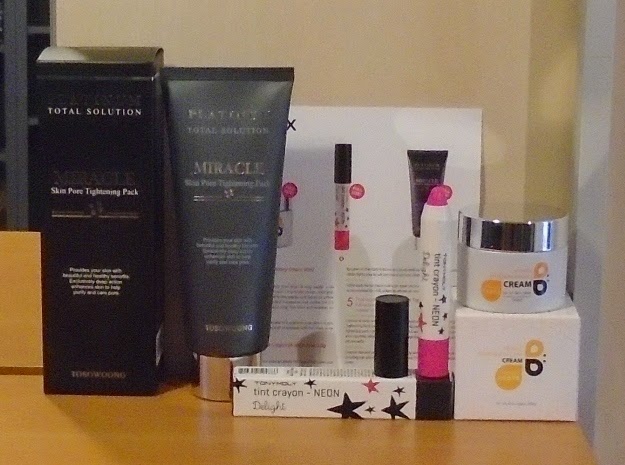 Migabee Bee Venom & Honey Cream
Bee venom, royal jelly, propolis and honey. Cool. I got a peeling mask from the same brand back in the honeybox. It doesn’t make me go OMG, but I like it.
There’s a weird stink to the jar though. It doesn’t come from the cream itself, but rather from the lid?! Odd! I think the stink must have combined with the stink from the Youngwoosa Oh! It’s lovely and soft cream into a nasty synergy-stink to stink up the grey cardboard box. (4 “stink”s in one sentence. That’s a new one for me. Hmm)

Tonymoly Delight Tint Crayon in 06 Neon Pink
Hah. This is actually pretty OMG: It says the lip stain should glow in the dark. Colour is even pretty cute.

Not sure if I like the K-style box better than the OMG box, but both are good. Who would have thought I would like a makeup box?
Posted by Lady Igor at Monday, October 20, 2014