Aka. "Projects I start when I should do other projects, like work."

I've been thinking of making a paranda after Ohtawen commented on the Hair inspiration post.


I can see why that style inspired you - it's really beautiful. Unfortunately I don't have enough hair for an additional bun, so I won't be attempting this one. I sometimes do just a coronet braid, but I have trouble with the taper... I dislike asymmetry probably as much as you :)


That's why I usually cheat and do a Dutch braid at the nape of my neck - just several passes, from one ear to the other. Then I braid as usual and wind the braid around my head, tucking the thinnest ends in the braided base and thus making the braid more uniform.
But I like your idea of a scarf to even out the thickness of the braid. It's totally worth a shot. Maybe even a paranda could help?

So I started looking Parandas up, but I keep getting stuck at the idea that Parandas join in the hair in one big bulk. Hmm.

I'd like my "extensions" to offer some gradual bulk and maybe even taper down again in a more natural-looking way. You know what I mean?
Like, more of a fun little detail instead of taking over the entire braid.

But then in the middle of doing more important things like finishing up a project for work *cough*, I got an idea. 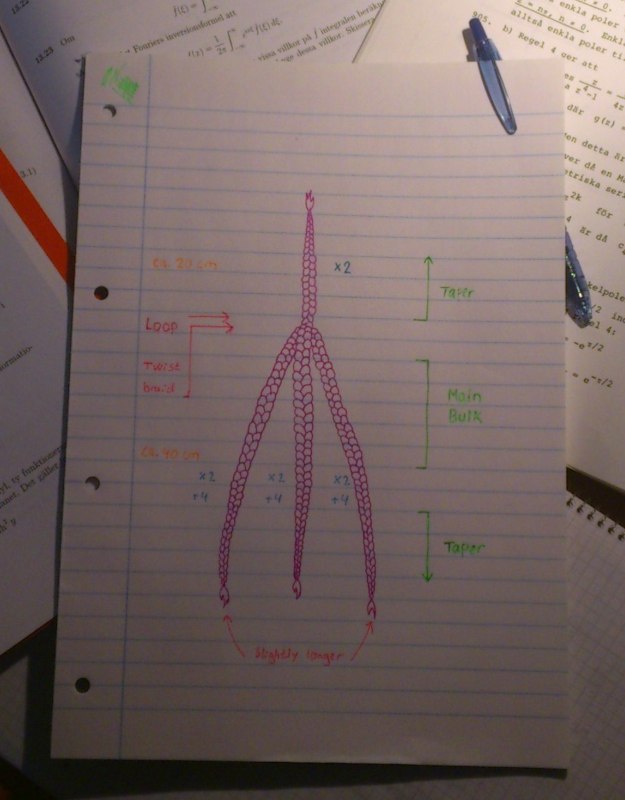 Shit I do when I should do more important things.
Ink on paper
Igor, October 24th 2015

So, let me explain the idea:
Instead of 3 parts, I make 4. The 4th one is the beginning part that is braided in first before being joined by the other 3 parts.
Instead of wool, I will be using the purple extensions (mentioned here) that I haven't had much success with. I will explain why tomorrow when I get home. The numbers are how many of the individual pieces I will use and how.
The "Paranda" will have taper in both ends.

I'm actually looking forward to play around with this tomorrow!